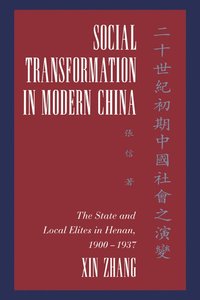 av Xin Zhang
Häftad Engelska, 2006-11-01
379
Köp
Spara som favorit
Kan tyvärr inte längre levereras innan julafton.
Finns även som
Visa alla 1 format & utgåvor
The sources and nature of China's transformation from a traditional to modern society - accelerated in the early twentieth century by the downfall of the Qing dynasty, the advent of foreign technology and increasing commercialization - are critical issues for the study of modern China. In this book, Xin Zhang uses the case of local elites and the power structure of Henan province in north-central China to demonstrate how local politics first transformed local society, challenged the state and eventually influenced change across China. Rather than focusing separately on elite mobility, social mobilization or state-making, Zhang observes changes in all three categories as interrelated aspects of a single, self-generating phenomenon of social change. Zhang's application of social science theory and rich, original, empirical data, sheds light on the sources of China's modernization, political and social identity, and the shifting relationship between the state and local elites.
Visa hela texten

"Professor Zhang's work is in the vanguard of work on twentieth-century China. Although the book focuses on Henan province, its themes have nation-wide implications; his study indeed raises important new questions about many of the themes that have come to be at the center of intellectual discourse about modern China: relationships between state and society; relationships between tradition and modernity; questions of social and political identity; the relativity of context; and the role of space and place in history. Professor Zhang's own command and presentation of theoretical issues itself will insure the readership of comparativists from other disciplines and other areas of history. This book promises to be a most significant contribution to the field." R. Keith Schoppa, Loyola College in Maryland

"This carefully researched, theoretically sophisticated and highly original book gives us a window on to a very under-studied subject: the evolution of social networks and associations in early twentieth-century rural China. The study ofnew and old associational forms in urban Chinahas already begun to transform our understanding of politics, culture, revolution,and the nature of Chinese modernity: by moving this inquiry to the much larger and more fragmented world of rural China, Professor Zhang raises questions of enormous importance, and finds surprisingly bountiful materials with which to answer them." Kenneth Pomeranz, University of California, Irvine

"...a fascinating account of rough talent battling refinement and inheritance for leadership of local communities in early twentieth century China. Rarely have we seen so clearly how the collapse of an old social order can create new avenues of social advancement that bear directlyon the development of the modern state." John Fitzgerald, La Trobe University

"The book will be read with profit by all historians whose focus is local history in the early decades of the last century in China." The Historian

"the book is a valuable addition to the many recent studies of China." History

"such material provides scholar with significant new information about the history of the past century for almost all parts of China, including many of the most peripheral rural countries...This rewarding study by Xin Zhang is the most recent of these efforts...overall this is a wide-ranging and stimulating exploration of an important topic and a fascinating body of information." THE CHINA JOURNAL