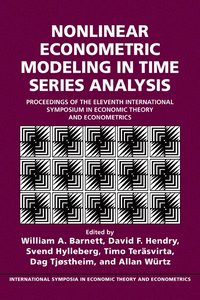 Proceedings of the Eleventh International Symposium in Economic Theory

'The amount of research activity devoted to nonlinear time series modeling has virtually exploded during the past decade. Many of the techniques just recently developed in that literature have already been included in the standard toolbox by macroeconomists and finance practitioners working in the public and private sectors. This latest volume in the International Symposia in Economic Theory and Econometrics series brings together a collection of new papers in this active and exciting area of research. The topics and methodologies are wide ranging, but each of the chapters is well motivated by a genuine, interesting economic problem. A stimulating read.' Tim Bollerslev, Duke University

'The discovery of nonlinear dynamical behaviour in economic and financial time series is the most exciting development in applied econometrics over the past decade. Attention has now moved to the difficult task of identifying the forms of the processes generating these complicated dynamics. The papers contained in Nonlinear Econometric Modeling in Times Series exemplify the surrent state-of-the-art of work in this important area.' Douglas M. Patterson, Virginia Polytechnic institute and State University

'Modern economic processes are often nonlinear, in particular, in international and financial markets. The book by Barnett et al. contains new and challenging studies on modelling and estimating this nonlinearity. It is highly recommended material.' Herman van Dijk, Econometric Institute Rotterdam, The Netherlands

'It seems clear that empirical econometric models based on time series data will be, if anything, nonlinear in nature. This book contains high level contributions to the theory and the application of nonlinear time series models. Its chapters reflect the diversity of topics and approaches in a field that is fundamentally relevant for both macroeconomics and econometrics.' Luc Bauwens, CORE, Universit catholique de Louvain, Belgium