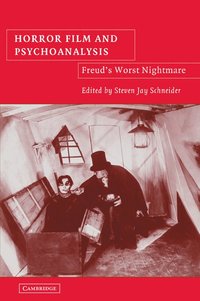 av Steven Jay Schneider
Häftad Engelska, 2009-01-29
299
Köp
Spara som favorit
Skickas inom 10-15 vardagar.
Fri frakt inom Sverige för privatpersoner.
Finns även som
Visa alla 2 format & utgåvor
Psychoanalytic theory has been the subject of attacks from philosophers, cultural critics and scientists who have questioned the cogency of its reasoning as well as the soundness of its premises. Nevertheless, when used to shed light on horror cinema, psychoanalysis in its various forms has proven to be a fruitful and provocative interpretative tool. This volume seeks to find the proper place of psychoanalytic thought in critical discussion of cinema in a series of essays that debate its legitimacy, utility and validity as applied to the horror genre. It distinguishes itself from previous work in this area through the self-consciousness with which psychoanalytic concepts are employed and the theorization that coexists with interpretations of particular horror films and subgenres.
Visa hela texten

Review of the hardback: 'Who can resist a volume which, apropos the most popular movie genre - horror, stages the debate between the main orientations of contemporary psychoanalytic film theory? And why should we resist a unique combination of top theory and fascinating topic? Everyone in cinema and cultural studies should just grab this collection, sit down and learn!' Slavoj Zizek , Ljubljana, University of Slovenia

Review of the hardback: 'This superb collection offers its readers a roller-coaster ride through contemporary film theory and the question of horror. Psychoanalysis is the central issue for many contributors, with essays exploring not only its place in relation to the Gothic Imagination at the heart of horror but also its consequent role in both forming and analysing the horror film. Sparks fly across the pages as the philosophical and epistemological premises of theories of horror are themselves subjected to analysis and evaluation as well as, in some cases, rejection. All the while the horror film, in all its gory glory, both uncanny and irrepressible, remains centre stage throughout the wide-ranging discussions and analyses of films from Nosferatu to Scream. The essays in The Horror Film and Psychoanalysis: Freud's Worst Nightmares are exemplary philosophical and aesthetic discussions, their complex and subtle arguments are both challenging and thought-provoking.' Elizabeth Cowie, University of Kent, Canterbury