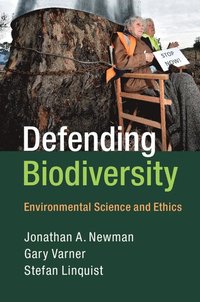 av Jonathan A Newman
Häftad Engelska, 2017-10-05
429
Köp
Spara som favorit
Skickas inom 10-15 vardagar.
Fri frakt inom Sverige för privatpersoner.
Finns även som
Visa alla 3 format & utgåvor
Imagine that you are an environmentalist who passionately believes that it is wrong to drill for oil in the Arctic National Wildlife Refuge. How do you convince someone that a decision to drill is wrong? Debates about the environment and how humans ought to treat it have gone on for decades, yet arguments in favor of preserving biodiversity often lack empirical substance or are philosophically nave, making them far less effective than they could be. This book critically examines arguments that are commonly offered in support of biodiversity conservation. The authors adopt a skeptical viewpoint to thoroughly test the strength of each argument and, by demonstrating how scientific evidence can be integrated with philosophical reasoning, they help environmentalists to better engage with public debate and judiciously inform public policy. This interdisciplinary and accessible book is essential reading for anyone who engages in discussions about the value of biodiversity conservation.
Visa hela texten

'... the book provides an incredibly valuable discussion; one that ought to be had between wildlife managers, conservationists, and biologists the world over. Anyone working within the environmental field is likely to find this volume engaging and useful for carefully examining the strength of their own beliefs and go-to arguments for biodiversity conservation.' Emily A. Gregg, The Quarterly Review of Biology

Jonathan A. Newman is Dean of the College of Biological Science at the University of Guelph, Ontario, where he was also the founding Director of the School of Environmental Sciences, and the Chair of the Department of Environmental Biology. He has held previous faculty positions at the University of Oxford and at Southern Illinois University, Carbondale. He has been associated editor for the Journal of Ecology and for the Journal of Animal Ecology, and a member of the editorial boards of the journals Global Change Biology and Behavioral Ecology. He is the lead author for the 2011 book Climate Change Biology and has published more than 100 scientific journal articles on plant-animal-fungal interactions, invasive species, climate change, and the determinants and impacts of biodiversity. He is a member of the Ecological Society of America, the Canadian Society of Ecology and Evolution, and the British Ecological Society. He is a Fellow of the British Royal Society of Biology, and a monthly donor to Greenpeace Canada. He holds B.A. and Ph.D. degrees from the State University of New York, Albany, and a postgraduate diploma in learning and teaching in higher education from the University of Oxford. Gary Varner is a Professor and former head of Philosophy at Texas A & M University. Varner wrote one of the first dissertations on environmental ethics. His publications have covered topics in hunting, animal agriculture and human nutrition, medical research, cloning, and pet ownership, as well as philosophical issues associated with professional ethics and environmental law. He is the author of In Nature's Interests? Interests, Animal Rights, and Environmental Ethics (1998), and Personhood, Ethics, and Animal Cognition Situating Animals in Hare's Two Level Utilitarianism (2012). He is a lifetime member of the American Philosophical Association, and a charter member of the International Society for Environmental Ethics. He holds a B.A. degree from Arizona State University, an M.S. from the University of Georgia, and a Ph.D. from the University of Wisconsin, Madison. Stefan Linquist is a professor of philosophy and adjunct professor of biology at the University of Guelph, Ontario. He is a philosopher of biology with research interests in ecology, genomics, evolution, and psychology. His publications have covered topics in genome-level ecology, the nature of ecological laws/contingency, function concepts in genomics, and cultural evolution. He holds B.A. (Simon Fraser University) and Ph.D. (Duke University) degrees in philosophy, and an MS.c. (State University of New York, Binghampton) degree in evolutionary biology. He is a founding director of the Ucluelet Aquarium Society - a public education facility focusing on marine biodiversity in British Columbia. In 2016 he was awarded the Guelph Faculty Association's Distinguished Professor Award for Excellence in Teaching.