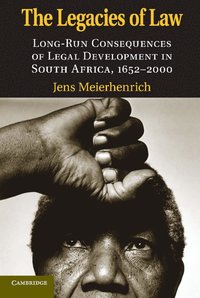 The Legacies of Law

av Jens Meierhenrich
Häftad Engelska, 2010-06-21
319
Köp
Spara som favorit
Kan tyvärr inte längre levereras innan julafton.
Finns även som
Visa alla 2 format & utgåvor
Focusing on South Africa during the period 1650-2000, this book examines the role of law in making democracy work in changing societies. The Legacies of Law sheds light on the neglected relationship between path dependence and the law. Meierhenrich argues that legal norms and institutions, even illiberal ones, have an important - and hitherto undertheorized - structuring effect on democratic outcomes. Under certain conditions, law appears to reduce uncertainty in democratization by invoking common cultural backgrounds and experiences. In instances where interacting adversaries share qua law reasonably convergent mental models, transitions from authoritarian rule are shown to be less intractable. Meierhenrich's historical analysis of the evolution of law - and its effects - in South Africa during the period 1650-2000, compared with a short study of Chile from 1830-1990, shows how, and when, legal norms and institutions serve as historical causes to both liberal and illiberal rule.
Visa hela texten

'South Africa's peaceful transition from apartheid to democracy has surprised many observers. In an innovative approach to this topic, Professor Jens Meierhenrich argues that existing legal norms and institutions have important structuring effects on transitions to democracy. He identifies the dichotomy between apartheid law's rational formalism and its irrational substance and asserts that this body of law 'was, in an important respect, necessary for making democracy work'. ... The Legacies of Law offers an important account of the end of apartheid and expands the lessons of that experience to broader issues of democratization.' Harvard Law Review

'Meierhenrich's work provides an impressive synthesis of scholarly research on authoritarian transitions generally and dismantling of apartheid in particular ... the work provides a strong historical and legal framework within which to understand how fundamentally illegitimate systems can function and ultimately even further the democratic process.' Law and Politics Book Review

'Meierhenrich's study is widely recognized by many specialists as an exceptional analysis of legal development in South Africa's democratization process since the mid-1600s, with emphasis on the apartheid era. ... His careful - and unique - methodology creates a complex but useful analysis of South Africa's transition to democracy. ... [T]he beneficiaries of this intellectually sophisticated analysis are primarily sophisticated scholars. ... Summing up: highly recommended.' Choice

'Jens Meierhenrich has written a wonderfully ambitious, challenging book. It is, at once, a sweeping, quite original history of the role of legalities in the troubled South African past and a provocative conceptual work that lays the foundation for a theory of democracy rooted in the rule/s of law. An impressively erudite, transdisciplinary study - one with broad comparative relevance - it will have a major impact on scholarship in law and society. Everywhere.' John Comaroff, University of Chicago, American Bar Foundation

'In a highly scholarly work, that draws heavily on South African case law, legislation and legal literature, Jens Meierhenrich explores a contradiction in the South African apartheid state that informed South African jurisprudential discourse during the apartheid era. On the one hand, the apartheid regime invoked law as an instrument to impose and justify racial discrimination and political repression, but on the other hand it allowed relatively independent courts to administer justice in accordance with the enlightened values of the common law, a mix of English and Roman-Dutch law. Meierhenrich explains this contradiction in terms of a conflict between a prerogative state, which shows little respect for the rule of law, and a normative state, which respects the rule of law. His thesis, with wide philosophical underpinnings, provides a satisfactory explanation for the fact that when South Africa became a de...

Jens Meierhenrich is Assistant Professor of Government and of Social Studies at Harvard University, where he is also a Faculty Associate at the Weatherhead Center for International Affairs. He recently served as the Carlo Schmid Fellow in Trial Chamber II of the International Criminal Tribunal for the Former Yugoslavia and has previously worked with Luis Moreno Ocampo, the Chief Prosecutor of the International Criminal Court. Professor Meierhenrich is also the author of a genocide trilogy, comprising The Rationality of Genocide, The Structure of Genocide, and The Culture of Genocide (all forthcoming).