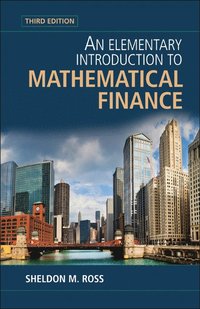 An Elementary Introduction to Mathematical Finance

av Sheldon M Ross
Inbunden Engelska, 2011-02-28
549
Köp
Spara som favorit
Skickas inom 10-15 vardagar.
Fri frakt inom Sverige för privatpersoner.
Finns även som
Visa alla 2 format & utgåvor
This textbook on the basics of option pricing is accessible to readers with limited mathematical training. It is for both professional traders and undergraduates studying the basics of finance. Assuming no prior knowledge of probability, Sheldon M. Ross offers clear, simple explanations of arbitrage, the Black-Scholes option pricing formula, and other topics such as utility functions, optimal portfolio selections, and the capital assets pricing model. Among the many new features of this third edition are new chapters on Brownian motion and geometric Brownian motion, stochastic order relations and stochastic dynamic programming, along with expanded sets of exercises and references for all the chapters.
Visa hela texten

'... an excellent introduction to the subject ... the book is ideally suited for self-study and provides a very accessible entry point to this fascinating field.' ISI Short Book Reviews

'... this excellent text achieves its aim to provide a highly accessible and at the same time accurate presentation of the subject. I would recommend it.' The Statistician

'... an excellent introduction to the mathematics of finance ... very useful as a text for an introductory course.' Zentralblatt Math

'... provides an accessible and relatively deep insight into basic and advanced topics of mathematical finance ... The lucid style of the exposition will be appreciated by readers interested in the topic, and by researchers, students, and practitioners.' European Maths Society Journal

Sheldon M. Ross is the Epstein Chair Professor at the Department of Industrial and Systems Engineering, University of Southern California. He received his Ph.D. in statistics at Stanford University in 1968 and was formerly a Professor at the University of California, Berkeley, from 1976 until 2004. He has published more than 100 articles and a variety of textbooks in the areas of statistics and applied probability, including Topics in Finite and Discrete Mathematics (2000), Introduction to Probability and Statistics for Engineers and Scientists, 4th edition (2009), A First Course in Probability, 8th edition (2009), and Introduction to Probability Models, 10th edition (2009), among others. Dr Ross serves as the editor for Probability in the Engineering and Informational Sciences.