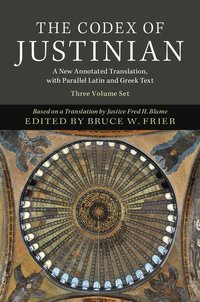 A New Annotated Translation, with Parallel Latin and Greek Text

Multiple copy pack Latin, 2016-09-08
8089
Köp
Spara som favorit
Kan levereras innan julafton!
The Codex of Justinian is, together with the Digest, the core of the great Byzantine compilation of Roman law called the Corpus Iuris Civilis. The Codex compiles legal proclamations issued by Roman emperors from the second to the sixth centuries CE. Its influence on subsequent legal development in the medieval and early modern world has been almost incalculable. But the Codex has not, until now, been credibly translated into English. This translation, with a facing Latin and Greek text (from Paul Krger's ninth edition of the Codex), is based on one made by Justice Fred H. Blume in the 1920s, but left unpublished for almost a century. It is accompanied by introductions explaining the background of the translation, a bibliography and glossary, and notes that help in understanding the text. Anyone with an interest in the Codex, whether an interested novice or a professional historian, will find ample assistance here.
Visa hela texten

'The Codex Justinianus, a collection selected in the sixth century AD from thousands of responses to enquiries made by the imperial legal secretariat, is an unrivalled source for the actual lives and concerns of Roman citizens all over the Empire, and the changing policies of their rulers, over half a millennium. A team of ancient historians and academic lawyers has now produced an accurate and comprehensible English translation, based on that made by the late Justice Fred H. Blume almost a century ago, and with a facing Latin and Greek text. There are several valuable extra features, especially a glossary explaining Latin legal terms, footnotes ... explaining the relevant legal rules and procedures ... [and] copious provision of cross-references to related passages in the CJ and other major Roman legal writings. Ancient historians and legal historians alike have cause to be grateful to the compilers. This is the edition on which, from now on, they may confidently rely.' Jane F. Gardner, Emeritus Professor of Ancient History, University of Reading

'With this annotated translation, we finally possess a complete and reliable version, in English, of one of the monuments of Roman law. The editors and translators (not to mention the ghost of Fred Blume) are owed a profound thanks for this important service to anyone interested in the history of the world's most influential legal system. The Codex is an unparalleled source of Roman law in action and often shows us how the rules were brought to bear on the real problems encountered by the inhabitants of the empire. This translation will be an aid to any student of law and life in the Roman world.' Kyle Harper, Senior Vice President and Provost, and Professor of Classics and Letters, University of Oklahoma

Fred H. Blume was appointed to the Wyoming Supreme Court in 1921 and retired from the bench in 1962 as a greatly honored jurist. He began his translation of the Codex of Justinian in 1919, a labor with which he continued for much of his life. Bruce W. Frier is the John and Teresa D'Arms Distinguished University Professor of Classics and Roman Law at the University of Michigan, Ann Arbor. He is the author of numerous books and articles on economic and social history, focusing especially on Roman law. His publications include Landlords and Tenants in Imperial Rome (1980), The Rise of the Roman Jurists (1985), A Casebook on the Roman Law of Delict (1989), A Casebook on Roman Family Law (2003) and The Modern Law of Contracts, now in its third edition (2012) and written with Michigan Law School colleague J. J. White.