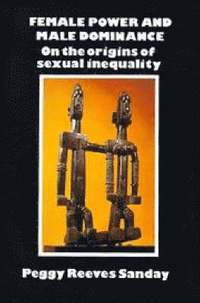 On the Origins of Sexual Inequality

av Peggy Reeves Sanday
Häftad Engelska, 1981-04-01
312
Köp
Spara som favorit
In this book, Professor Peggy Sanday provides a ground-breaking examination of power and dominance in male-female relationships. How does the culturally approved interaction between the sexes originate? Why are women viewed as a necessary part of political, economic, and religious affairs in some societies but not in others? Why do some societies clothe sacred symbols of creative power in the guise of one sex and not of the other? Professor Sanday offers solutions to these cultural puzzles by using cross-cultural research on over 150 tribal societies. She systematically establishes the full range of variation in male and female power roles and then suggests a theoretical framework for explaining this variation. Rejecting the argument of universal female subordination, Professor Sanday argues that male dominance is not inherent in human relations but is a solution to various kinds of cultural strain. Those who are thought to embody, be in touch with, or control the creative forces of nature are perceived as powerful. In isolating the behavioural and symbolic mechanisms which institute male dominance, professor Sanday shows that a people's secular power roles are partly derived from ancient concepts of power, as exemplified by their origin myths. Power and dominance are further determined by a people's adaptation to their environment, social conflict, and emotional stress. This is illustrated through case studies of the effects of European colonialism, migration, and food stress, and supported by numerous statistical associations between sexual inequity and various cultural stresses.
Visa hela texten

List of tables and figures; Preface; Introduction; Part I. Plans for Sex-Role Behaviour: 1. Scripts for female power; 2. Scripts for male dominance; Part II. Constructing Sex-Role Plans: 3. The environmental context of metaphors for sexual identities; 4. Plans for the sexual division of labor; 5. Blood, sex, and danger; Part III. The Women's World: 6. The bases for female political and economic power and authority; 7. The decline of the women's world: the effect of colonialism; Part IV. The Dynamics of Male Dominance and Sexual Inequality: 8. The bases for male dominance; 9. Why women?; Part V. Conquerors of the Land Flowing with Milk and Honey: Epilogue; Appendixes; Notes; Bibliography; Index.