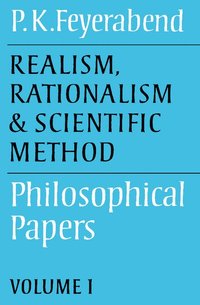 av Paul K Feyerabend
Häftad Engelska, 1985-06-01
289
Köp
Spara som favorit
Skickas inom 7-10 vardagar.
Gratis frakt inom Sverige över 159 kr för privatpersoner.
Over the past thirty years Paul Feyerabend has developed an extremely distinctive and influentical approach to problems in the philosophy of science. The most important and seminal of his published essays are collected here in two volumes, with new introductions to provide an overview and historical perspective on the discussions of each part. Volume 1 presents papers on the interpretation of scientific theories, together with papers applying the views developed to particular problems in philosophy and physics. The essays in volume 2 examine the origin and history of an abstract rationalism, as well as its consequences for the philosophy of science and methods of scientific research. Professor Feyerabend argues with great force and imagination for a comprehensive and opportunistic pluralism. In doing so he draws on extensive knowledge of scientific history and practice, and he is alert always to the wider philosophical, practical and political implications of conflicting views. These two volumes fully display the variety of his ideas, and confirm the originality and significance of his work.
Visa hela texten

'The issues here run deep, to the heart of a number of central debates in contemporary philosophy concerning anti-realism, Wittgenstein, rationality and so on ... for anyone who wants to engage with those issues - which means not only philosophers of science but anyone at all excited by the current state of philosophy - these exhilarating volumes must be essential reading.' Philosophical Investigations

'The importance of Feyerabend is that he shows this easy way out cannot be taken for granted. As long as we had at the back of our minds the idea of an independent reality to pull thought in the right direction, Feyerabend's insistence on the inexhaustible diversity of possible standards seemed merely provocative. But without such a reality the onus of argument has shifted. Little as we may like it, Feyerabend is in the driving seat. He has actually done the historical work to show that sane men with good ideas, both within Western science and without, have hewn all kinds of different intellectual values. After Feyerabend, simply gesturing in the direction of some supposed common intellectual commitment is no longer going to hold relativism at bay. Indeed Fayerband has made it very difficult to see how we can continue to believe in the one true theoretical way. The Times Literary Supplement

Introduction to volumes 1 and 2; Part I. On The Interpretation of Scientific Theories: 1. Introduction: scientific realism and philosophical realism; 3. An attempt at a realistic interpretation of scientific theories; 4. Explanation, reduction and empiricism; 5. On the 'meaning' of scientific terms; 6. Reply to criticism: comments on Smart, Sellars and Putnam; 7. Science without experience; Part II. Applications and Criticisms: 8. Introduction: proliferation and realism as methodological principles; 9. Linguistic arguments and scientific method; 10. Materialism and the mind-body problem; 11. Realism and instrumentalism: comments on the logic of factual support; 12. A note on the problem of induction; 13. On the quantum theory of measurement; 14. Professor Bohm's philosophy of nature; 15. Reichenbach's interpretation of quantum mechanics; 16. Niels Bohr's world view; 17. Hidden variables and the argument of Einstein, Podolsky and Rosen; Sources; Name index; Subject index.