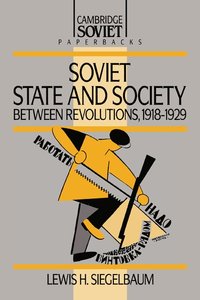 Soviet State and Society between Revolutions, 1918-1929

av Lewis H Siegelbaum
Häftad Engelska, 1992-08-01
449
Köp
Spara som favorit
Finns även som
Visa alla 1 format & utgåvor
This is the first book to analyse the relationship between the Soviet state and society from the October Revolution of 1917 to the revolution under Stalin of the late 1920s and early 1930s. Professor Lewis Siegelbaum examines the ways in which the promise of a new society made by the 1917 Revolution informed the thinking of those who had experienced the order which preceded it. But how did that old order limit possibilities? How did the new Party leaders, worker activists, artists, and scientists know what to abolish, what to retain, and what to transform? The author explores these questions by tracing the evolution of the ruling Communist Party and its New Economic Policy and the changing fortunes of industrial workers, peasants, and the scientific and cultural intelligentsia. He demonstrates how these different actors sought to appropriate the promise of the 1917 Revolution for their own purposes, highlights the compromises they made, and explains why in the late 1920s these compromises had started to break down.
Visa hela texten

"...this book is a most useful tool for refocusing the examination of Soviet Russia." J. Zimmerman, Choice

"...a pioneering study of the interaction of Soviet state and society in the ideological, political, economic, and social spheres from 1918 to 1929....A short review cannot do justice to the merits of the book. As a work of synthesis, it combines brilliant and balanced conceptualization of the problems and tensions in Soviet state and society, a formidable command of the current scholarship on the period, and an agenda of topics for further research that will make use of recently opened Soviet archives." Thomas S. Pearson, The Historian

"...a well-written and scrupulous synthesis of the abundant new scholarship on the 1920s....Siegelbaum recaptures the sense of directionless and uncertainty prevalent during the 1920s....an exacting interpretive guide." Stephen Kotkin, Journal of Modern History

Preface and acknowledgements; Russian terms and abbreviations; Introduction; 1. Bequeathals of the Revolution, 1918-20; 2. The crisis of 1920-21; 3. The perils of retreat and recovery; 4. Living with NEP; 5. Dangers and opportunities; Epilogue and conclusions; Bibliography.