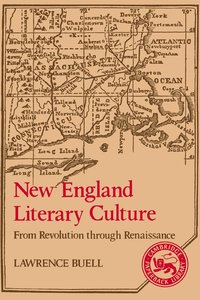 From Revolution through Renaissance

av Lawrence Buell
Häftad Engelska, 1989-04-01
699
Köp
Spara som favorit
Skickas inom 10-15 vardagar.
Fri frakt inom Sverige för privatpersoner.
This book is a study of the development of New England literature and literary institutions from the American Revolutionary era to the late nineteenth century. Professor Buell explores the foundations, growth and literary results of the professionalization of the writing vocation. He pays particular attention to the major writers - Emerson, Thoreau, Hawthorne, Stowe and Dickinson - but surveys them with a number of lesser-known authors, and explores the conventions, values and institutions which affected them all. Some of the main topics covered include the distinctive features of the Early National and Antebellum periods in New England writing; the importance of certain literary genres (poetry, oratory and religious narrative; etc.); the impact of Puritanism and its values; and the invention of acceptable conventions for portraying the New England landscape and institutions in literature.
Visa hela texten