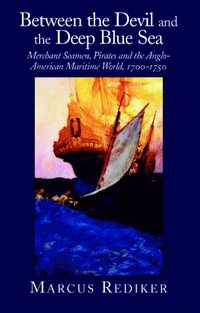 Between the Devil and the Deep Blue Sea

av Marcus Rediker
Häftad Engelska, 1989-02-01
309
Köp
Spara som favorit
Kan levereras innan julafton!
Finns även som
Visa alla 1 format & utgåvor
Between the Devil and the Deep Blue Sea focuses upon the seamen's experience in order to illuminate larger historical issues such as the rise of capitalism, the genesis of free wage labor, and the growth of an international working class. These epic themes were intimately bound up with the everyday hopes and fears of the common men who toiled upon the deep.
Visa hela texten

'In this important book, Marcus Rediker imbeds rich empirical research within an impressive theoretical framework. The result is a fresh and powerful analysis of the eighteenth-century maritime world that will quickly establish the author as a leading scholar in Anglo-American labor history.' Gary Nash, University of California, Los Angeles

'Marcus Rediker's in-depth study of seamen in the early eighteenth century tells us a great deal not only about the shipping industry but also about the rise of capitalist relations in general in England, for which the industry may have been a more important forcing house than has previously been realised. No one interested in the history of the eighteenth century can afford to ignore this book.' Christopher Hill