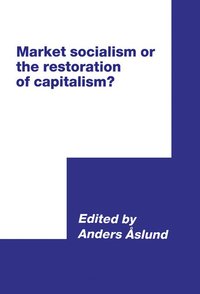 Market Socialism or the Restoration of Capitalism?

av Anders Aslund
Inbunden Engelska, 1991-10-01
639
Köp
Spara som favorit
When East European communism collapsed in the revolutions of 1989, the newly liberated countries discarded socialism altogether. For the first time, most of Eastern Europe experienced free elections and a multitude of parties, mostly with liberal, conservative or nationalist connotations, made their entry into political life. A bewildered world is now trying to imagine the future course of events. Has capitalism won or is something different emerging? Has market socialism vanished for good? How can the transitionary period be managed and what effect will it have on the standard of living in Eastern Europe? In this book, ten distinguished experts explore this transition to a market economy in Eastern Europe. Market Socialism or the Restoration of Capitalism? presents a collection of thought-provoking articles and will therefore be essential reading for all students and specialists of Soviet and East European studies, economics and politics.
Visa hela texten

Introduction Anders Aslund; Part I. Market Socialism Revisited: 1. The compatibility of planning and market reconsidered Wlodzimierz Brus; 2. Market socialism: the model that might have been but never was Domenico Mario Nuti; 3. Monetary-fiscal management for macroeconomic equilibrium and growth Gerhard Fink; Part II. Economic Thinking and Policy-Making: 4. The possible new role of market and planning in Poland and Hungary Jan Adam; 5. Rationalizing the centrally managed economy: the market Pekka Sutela; 6. Changes in Soviet economic policy-making in 1989 and 1990 Anders Aslund; 7. The restructuring of Soviet industrial ministries since 1985 Stephen Fortescue; Part III. Effects of Perestroika on Soviet Life: 8. Employment and the reallocation of labour in the USSR Sheila Marnie; 9. Changes in income inequality in the USSR Henryk Flakierski; 10. Estonia's economic development 1940-90 in comparison with Finland Jan Ake Dellenbrant; Index.