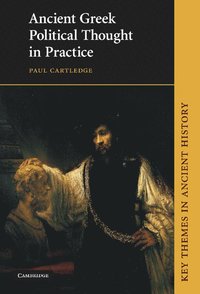 av Paul Cartledge
Inbunden Engelska, 2009-05-28
553
Köp
Spara som favorit
Skickas inom 7-10 vardagar.
Gratis frakt inom Sverige över 159 kr för privatpersoner.
Finns även som
Visa alla 3 format & utgåvor
Ancient Greece was a place of tremendous political experiment and innovation, and it was here too that the first serious political thinkers emerged. Using carefully selected case-studies, in this book Professor Cartledge investigates the dynamic interaction between ancient Greek political thought and practice from early historic times to the early Roman Empire. Of concern throughout are three major issues: first, the relationship of political thought and practice; second, the relevance of class and status to explaining political behaviour and thinking; third, democracy - its invention, development and expansion, and extinction, prior to its recent resuscitation and even apotheosis. In addition, monarchy in various forms and at different periods and the peculiar political structures of Sparta are treated in detail over a chronological range extending from Homer to Plutarch. The book provides an introduction to the topic for all students and non-specialists who appreciate the continued relevance of ancient Greece to political theory and practice today.
Visa hela texten

'Cartledge's arguments will doubtless inspire much fruitful debate in student seminars, and his ideas will give more experienced scholars much to think about as they examine the ancient evidence in rather more detail than is possible in a book of this length. Equally, the book will serve as an engaging introduction to the topic for those outside the discipline. It introduces the key texts, events and ideas that underpin Greek political thought in a way that captures the flavour of the current exciting period in the study of this fascinating subject.' Rosetta

'The scheme of the book, interweaving a narrative of what the Greeks did and a series of vignettes of how they thought, works very well, and for students and others this will be an attractive and stimulating introduction to the political life of the Greeks.' The Anglo-Hellenic Review

Paul Cartledge is A. G. Leventis Professor of Greek Culture at Cambridge University and a Fellow of Clare College. He has published extensively on Greek history over several decades, including The Cambridge Illustrated History of Ancient Greece (1997, new edition 2002), Sparta and Lakonia: A Regional History 1300-362 BC (2001), and Alexander the Great: The Hunt for a New Past (2004, revised edition 2005).