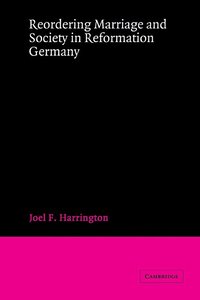 av Joel F Harrington
Inbunden Engelska, 1995-01-01
779
Köp
Spara som favorit
Skickas inom 7-10 vardagar.
Gratis frakt inom Sverige över 159 kr för privatpersoner.
Finns även som
Visa alla 1 format & utgåvor
This book examines the impact of the Protestant Reformation on both the ideal and practice of marriage in sixteenth-century Germany. Combining extensive archival work with a broad synthesis of scholarly research in legal, theological, and social history, it provides the most comprehensive evaluation to date of the Reformation's impact on marriage. The author compares Protestant reforming goals and achievements to those of contemporary Catholics. All sixteenth-century campaigns to restore 'traditional family values', he argues, must be viewed in the context of more gradual social transformations in private morality, public authority, and familial relations. The apparent innovations of the reformers - including the abolition of clerical celibacy and introduction of divorce - fade in comparison to their much greater adherence to the theological, legal and social traditions shared with their Catholic ancestors and contemporaries.
Visa hela texten

"...this well-documented, convincingly-argued book shows the aims of both religious and secular reformers in both Protestant and Catholic territories to have been conservative in nature, committed to enforcing the view of marriage that had been developing for centuries." Laurel Carrington, The American Journal of Legal History

"...a first-rate book on marriage and the control of sexuality in sixteenth-century Germany, solidly based on both published and archival sources....an important contribution to scholarship, showing the conjunction among social, religious, and legal history." Journal of Social History

"Harrington's account of the convergence of Catholic and Protestant reform of marriage is generally persuasive....[his] book is a solid addition to the growing literature on ideas and social practices in the Reformation era." Central European History

"...an excellent summation of the history of ecclesiastical doctrine--theological and legal--from the twelfth to the sixteenth century... Its analysis of the literature on marriage--both scholarly and contemporary--is masterful." Sixteenth Century Journal

"This is an ambitious study...densely researched...clear and even-handed...This element alone is an important service to field; that this study goes further and challenges scholars to widen the context of the discussion of marriage is praiseworthy and important." The Historian

"...it both illuminates an important aspect of the history of the family and reveals how much of its complex and multi-faceted history remains to be explored." Times Literary Supplement

"Joel Harrington has done both specialists and nonspecialists a great service by providing a book-length study that deserves to be read by a wide audience, including those interested in parts of the world well beyond Reformation Germany." Journal of the History of Sexuality

"For scholars interested in the family history of the sixteenth century. Joel Harrington's new book is a must-read. In a highly contentious field, Harrington has produced a work as provocative as any of its predecessors." Benjamin Kaplan, The Journal of Modern History