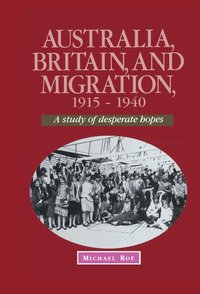 A Study of Desperate Hopes

av Michael Roe
Inbunden Engelska, 1995-07-01
1269
Köp
Spara som favorit
Skickas inom 10-15 vardagar.
Fri frakt inom Sverige för privatpersoner.
Finns även som
Visa alla 1 format & utgåvor
The story of Australia's post-war immigration program is well known, but little has been written about migration to Australia between the wars. This 1995 book is a systematic study of assisted emigration from Britain to Australia during the inter-war years. It looks at the British and Australian politicians and bureaucrats involved in the program and the half-million migrants who uprooted themselves. While their imperial ties were significant, the book shows that British and Australian governments acted in their own interests, using migration to meet their different needs, with little regard for the migrants themselves. Michael Roe shows that the Anglo-Australian relationship was rife with contradictions and these often came to a head in the debates over migration. Not only is the book an important study of imperial relations in the 1920s and 1930s, it describes an important and overlooked aspect of Australian political and social history.
Visa hela texten

"...a prodigious work of scholarship and one which all historians of Australia will find of immense and lasting value." Times Literary Supplement

"This book is another in the excellent series Studies in Australian History produced under the aegis of Cambridge University Press, and with it MIchael Roe makes a major contribution to the history of Australia in the early decades of the twentieth century....it is a tour de force of scholarship and the metjodical application of the historian's craft....admirable piece of work....Roe commands such respectful attention amongst Australian Historians." F.G. Clarke, American Historical Review

"Michael Roe is an eminent Australian historian who has chosen to study the neglected subject of immigration to Australia between the wars. ...this a very detailed analysis of British-Australian diplomacy on the issue of migration which also illuminates wider social attitudes among the policy-making elites. ...[Roe's] book will remain definitive for a long time." Erik Olssen, Labor History