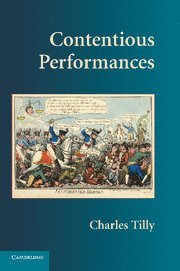 av Charles Tilly
Inbunden Engelska, 2008-08-04
579
Köp
Spara som favorit
Skickas inom 10-15 vardagar.
Fri frakt inom Sverige för privatpersoner.
Finns även som
Visa alla 2 format & utgåvor
How can we get inside popular collective struggles and explain how they work? Contentious Performances presents a distinctive approach to analyzing such struggles, drawing especially on incomparably rich evidence from Great Britain between 1758 and 1834. The book accomplishes three main things. First, it presents a logic and method for describing contentious events, occasions on which people publicly make consequential claims on each other. Second, it shows how that logic yields superior explanations of the dynamics in such events, both individually and in the aggregate. Third, it illustrates its methods and arguments by means of detailed analyses of contentious events in Great Britain from 1758 to 1834.
Visa hela texten

"Addressing the public performances through which crowds and other collectivities state grievances and make claims, Charles Tilly adds yet another dimension to his extraordinary explorations of the dynamics of contention. He deepens the approach to repertoires of contention which he made a staple of the field. In this book his cases come from late 18th and early 19th century Britain but his approach is important for all students of contentious politics everywhere. Tilly's lively voice animates this book as his intelligence sharpens the analysis."
-Craig Calhoun, New York University

"Drawing upon a dazzling array of qualitative and quantitative data, Charles Tilly explains the remarkable coherence and continuity of protest repertoires in a wide variety of historical and contemporary settings. This valuable synthesis, by the acknowledged master of the study of contentious politics, advances countless theoretical and methodological contributions to the field."
-Elizabeth J. Perry, Harvard University

"Only one historical sociologist has, for the past half century, launched so many ships to so many intellectually valuable destinations, and only one has managed to keep the massive sea-lane traffic that resulted so firmly in lucid and critical analytical view. He is Charles Tilly. It's hard to know what we, mere navigators by the charts he invented, will do without him."
-James C. Scott, Yale University

"Contentious Performances, completed a few months before Charles Tilly's untimely death, takes up one of his most important and fruitful ideas: that contentious politics is structured by 'repertoires of contention.' In this book Tilly sets out to define repertoires more exactly, to propose methods for detecting their presence, and to show how repertoires emerge and change in varying political contexts. Written with Tilly's typical verve, this book is an important addition to the oeuvre of one of the great social scientists of our era."
-William H. Sewell, Jr., The University of Chicago

Charles Tilly is currently Joseph L. Buttenwieser Professor of Social Science, Columbia University. Tilly has authored, co-authored, edited, or co-edited 50 published books and monographs. He has also published between 600 and 700 scholarly articles, reviews, review-essays, comments, chapters in edited collections, and prefaces not counting reprints, translations, and working papers. His most recently published books are Contention and Democracy in Europe, 1650-2000 (2004), Social Movements, 1768-2004 (2004), Economic and Political Contention in Comparative Perspective (co-authored and co-edited with Maria Kousis, 2005), Trust and Rule (2005), Why? (2006), Oxford Handbook of Contextual Political Analysis (co-authored and co-edited with Robert Goodin, 2006), Contentious Politics (co-authored with Sidney Tarrow, 2006), and Democracy (2007). He is a member of the National Academy of Sciences, the American Academy of Arts and Sciences, the American Philosophical Society, and the Ordre des Palmes Acadmiques. He has received numerous international prizes and honorary degrees.

1. Claims as performances; 2. How to detect and describe performances and repertoires; 3. How performances form, change, and disappear; 4. From campaign to campaign; 5. Invention of the social movement; 6. Repertoires and regimes; 7. Contention in space and time; 8. Conclusions.