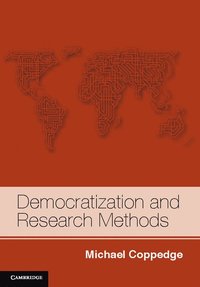 The Methodology of Comparative Politics

av Michael Coppedge
Häftad Engelska, 2012-06-25
360
Köp
Spara som favorit
Finns även som
Visa alla 1 format & utgåvor
Democratization and Research Methods is a coherent survey and critique of both democratization research and the methodology of comparative politics. The two themes enhance each other: the democratization literature illustrates the advantages and disadvantages of various methodological approaches, and the critique of methods makes sense of the vast and bewildering democratization field. Michael Coppedge argues that each of the three main approaches in comparative politics - case studies and comparative histories, formal modeling and large-sample statistical analysis - accomplishes one fundamental research goal relatively well: 'thickness', integration and generalization, respectively. Throughout the book, comprehensive surveys of democratization research demonstrate that each approach accomplishes one of these goals well but the other two poorly. Chapters cover conceptualization and measurement, case studies and comparative histories, formal models and theories, political culture and survey research, and quantitative testing. The final chapter summarizes the state of knowledge about democratization and lays out an agenda for multi-method research.
Visa hela texten

"By weaving together the study of democratization with a guide to comparative research methods, Coppedge has provided a major contribution to the field. Students and seasoned scholars will appreciate the grand tour of major analytic approaches through the lens of a substantively critical question. This will be an invaluable tool for teaching." - Evan Lieberman, Princeton University

"Coppedge takes us on a rich, methodologically-sophisticated journey through some of the thorniest territory in political science - how nations become, and remain, democratically-governed. Highly rewarding." - Michael Ross, University of California, Los Angeles

"Studying politics rigorously is hard, and studying democratization is especially so. Too often, political scientists respond to these challenges by retreating to small questions that can be studied with particular tools they are good at deploying. In this superb book Michael Coppedge shows why this response is wrong-headed. But he does much more than this. He provides a an up-to-date analysis of the major approaches to the study of democratization; he makes a compelling case for addressing important problems of democratization with multiple methods; he explains how different methods can be mutually complementary in the study of democratization; and he lays out a bold research agenda for the the future. The book should quickly become required reading in courses on democracy and democratization as well as an essential part in the methods training of the next generation of political scientists." - Ian Shapiro, author of The Real World of Democratic Theory

Michael Coppedge is Professor of Political Science at the University of Notre Dame. He is one of the principal investigators for the Varieties of Democracy Project at the Kellogg Institute, a collaboration producing many new indicators of democracy. He chaired the American Political Science Association's Task Force on Indicators of Democracy and Governance. His first book, Strong Parties and Lame Ducks: Presidential Partyarchy and Factionalism in Venezuela, analyzes institutional problems underlying the crisis of Venezuelan democracy. He has published articles on comparative and Latin American politics in the Journal of Politics, Perspectives on Politics, Comparative Politics, Comparative Political Studies, the Journal of Democracy, Party Politics, Studies in Comparative International Development and other journals and books. He is a past recipient of grants from Fulbright-Hayes, the Tinker Foundation, the World Society Foundation and the Research Council of Norway, and he has taught at Johns Hopkins School of Advanced International Studies, Princeton University, Yale University, and Georgetown University. Coppedge received his PhD from Yale University in 1988.