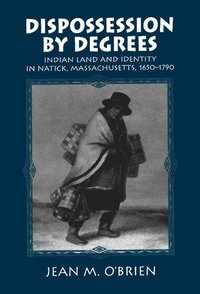 av Jean M O'Brien
Inbunden Engelska, 1997-02-01
549
Köp
Spara som favorit
Skickas inom 10-15 vardagar.
Fri frakt inom Sverige för privatpersoner.
Finns även som
Visa alla 1 format & utgåvor
According to Jean O'Brien, Indians did not simply disappear from colonial Natick, Massachusetts as the English extended their domination. Rather, the Indians creatively resisted colonialism, defended their lands, and rebuilt kin networks and community through the strategic use of English cultural practices and institutions. In the late eighteenth century, Natick Indians experienced a process of 'dispossession by degrees' that rendered them invisible within the larger context of the colonial social order, and enabled the construction of the myth of Indian extinction.
Visa hela texten

"In this thorough, well-written study of the Native American community of Natick, Massachusettes, Jean O'Brien demonstrates the remarkable evolution in the historical treatment of Indians in New England in the past thirty years....For readers who wish to understand in greater detail how native people came to lose the majority of the vast lands they controlled at the time of the first English settlements in southern New England, this book serves as an admirable case study." North Carolina Historical Review

"A welcome addition to the growing literature of studies about New England native people." Choice

"This is an excellent study, based on exhaustive research in the only sources available." Journal of Interdisciplinary History

"Jean O'Brien has challenged this myth of Indian extinction in a masterful social history tracing the rise and decline of the Naticks to the end of the eighteenth century. Her work is essential to the specialist who wishes to understand the complex relationships between Europeans and Native Americans in early New England. O'Brien's thesis is clearly stated. Dispossesion by Degrees must be nearly definitive in its exhaustive study if the tragic consequences resulting from the cultural changes imposed upon the Naticks. It speaks with eloquence for those Native Americans who are supposed to have disappeared but still struggle to maintain their cultural identity." New England Quarterly

"O'Brien convincingly demontrates the survival of lineages and individuals into the ninteenth century after Natick had become a Euro-American town." Journal of American History

"The author has not only produced a stimulating, vivid, and moving story but significantly deepened our understanding of Natick by penetrating into the inner working of the Indians." Historical Journal of Massachusetts

"O'Brien tells this complex story well. Indeed, it is her care in presenting its complexity that serves her--and the reader--particularly well....The author has used well the tools of ethnohistory, mining vital records, local town histories and documents, land deeds, and probate records effectively....O'Brien has added to our understanding of the European/native clash. Her story is carefully told, and it is ultimately in its complexity that it garners its deepest meaning." American Historical Review

"...they have thoroughly reshaped how the history of early American women and gender relations is understood and taught." Signs

"emphasizes the importance of soverignty to the preseverance of native peoples. She carefully reconstructs the history of the most prominent Indian communties in early New England-the "Praying Town" of Natick Massachuetts... Dispossesion by Degrees is convincing. O'Brien is at her best when she presents her meticulous original research into Natick records. She carefully reads the sources for subtexts and perceives their ideological function as English propag...

Prologue: 'My Land': Natick and the Narrative of Indian Extinction; Chapter 1: Peoples, Land, and Social Order; Chapter 2: The Sinews and the Flesh: Natick Comes Together, 1650-1675; Chapter 3: 'Friend Indians': Negotiating Colonial Rules, 1676-1700; Chapter 4: Divided In Their Desires; Chapter 5: Interlude: The Proprietary Families; Chapter 6: 'They Are So Frequently Shifting Their Place Of Residence': Natick Indians, 1741-1790; Conclusion.