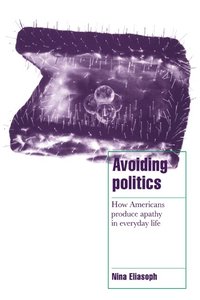 av Nina Eliasoph
Häftad Engelska, 1998-08-01
289
Köp
Spara som favorit
Skickas inom 5-8 vardagar.
Fri frakt inom Sverige för privatpersoner.
Finns även som
Visa alla 1 format & utgåvor
Nina Eliasoph's vivid portrait of American civic life reveals an intriguing culture of political avoidance. Despite the importance for democracy of open-ended political conversation among ordinary citizens, many Americans try hard to avoid appearing to care about politics. To discover how, where and why Americans create this culture of avoidance, the author accompanied suburban volunteers, activists, and recreation club members for over two years, listening to them talk - and avoid talking - about the wider world, together and in encounters with government, media, and corporate authorities. She shows how citizens create and express ideas in everyday life, contrasting their privately expressed convictions with their lack of public political engagement. Her book challenges received ideas about culture, power and democracy, while exposing the hard work of producing apathy.
Visa hela texten

"'Listening to the silence,' as Americans struggle to avoid civic engagement, Nina Eliasoph has discovered a terriby important truth: political apathy is not 'natural:' it has to be produced. By showing us how apathy is produced she suggests some ways o produce its opposite. She also vividly introduces us to a side of American life about which most academics haven't a clue. This is a book of the first importance for anyone who cares about the future of American democracy" Robert Bellah, Professor of Sociology, Emeritus, University of California, Berkeley

"With a gift for unusual and graphic language and an ear tuned to unspoken inferences, Nina Eliasoph uncovers layer upon layer of meanings in the 'plain text' of her volunteer group respondents. She hears the voices of the silent, penetrates the heart of the heartless, and knows what knowledgeable scholars do not yet understand. Avoiding Politics is a delightful entry into the backstage worlds of people who are 'ordinary'only in the universality of their attempts to escape from the politics that shapes their lives." Robert E. Lane, Professor of Political Science, Emeritus, Yale University

"Nina Eliasoph is a dazzling new entry in the debates over the empirical nature of participatory democracy (challenging Habermas Verba, Putnam, Gamson, Schudson, Wyatt, Noelle-Neumann and the rest). She argues that participatory democracy is failing not because space and time for citizen interaction are unavailable, but because American culture has 'decided' (1) that interest politics are the only kind of politics, and (2) that such politics are divisive and discouraging to decent citizens banded together for badly needed companionship, and even for 'doing good'!" Elihu Katz, Trustee Professor at the Annenberg School of Communication, University of Pennsylvania, and Professor Emeritus of Sociology and Communications at the Hebrew University of Jerusalem

"Eliasoph's book is a powerful antidote to the one-dimensional cynicism generated by media descriptions of what Americans really care about." Tikkun

"In this interesting and useful book, Eliasoph...examines the ways in which Americans `avoid politics' in their daily lives....an impressive examination of the crucial question of democracy: can there be democracy without citizens? Recommended at all levels." Choice

"I recommend this book to any activist who's sick of boring meetings and would like to argue for changing the culture of her group--or anyone who's ever wondered why they should care at all." Jane Slaughter, Metro Times

"...it is provocative and well worth reading. It makes a stimulating contribution to the field of political participation and participant observation research." Jon S. Ebeling, Perspectives on Political Science

"...her book is a big, innovative help in the ongoing attempt to think and rethink strategies for producing something else, for creating spaces in which 'public' ta...

Acknowledgements; 1. The mysterious shrinking circle of concern; 2. Volunteers trying to make sense of the world; 3. 'Close to home' and 'for the children': trying really hard not to care; 4. Humour, nostalgia and commercial culture in the postmodern public sphere; 5. Creating ignorance and memorizing facts: how Buffaloes understood politics; 6. Strenuous disengagement and cynical chic solidarity; 7. Activists carving out a place in the public sphere for discussion; 8. Newspapers in the cycle of political evaporation; 9. The evaporation of politics in the US public sphere; Appendices; Notes; References; Index.