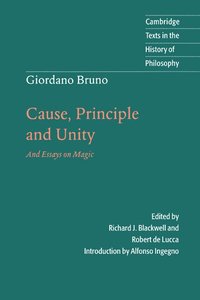 Giordano Bruno: Cause, Principle and Unity

And Essays on Magic

av Giordano Bruno
Häftad Engelska, 1998-11-01
319
Köp
Spara som favorit
Skickas inom 7-10 vardagar.
Fri frakt inom Sverige för privatpersoner.
Finns även som
Visa alla 1 format & utgåvor
Giordano Bruno's notorious public death in 1600, at the hands of the Inquisition in Rome, marked the transition from Renaissance philosophy to the Scientific Revolution of the seventeenth century. In his philosophical works he addressed such delicate issues as the role of Christ as mediator and the distinction, in human beings, between soul and matter. This volume presents new translations of Cause, Principle and Unity, in which he challenges Aristotelian accounts of causality and spells out the implications of Copernicanism for a new theory of an infinite universe, and of two essays on magic, On Magic and A General Account of Bonding, in which he interprets earlier theories about magical events in the light of the unusual powers of natural phenomena.
Visa hela texten

"The works of Giordano Bruno have for so long been confined to the Renaissance tradition of Hermeticism and magic, as they were presented by Frances Yates...that it is heartening to find some of them included in the Cambridge Texts in the History of Philosophy, edited by Desmond Clarke. Richard J. Blackwell's first ever English translation of two of the final works on magic are free renderings of Bruno's Latin, much aided by the recent Italian translations by Albano Biondi...They read well, and it is of great importance that the English-speaking public should at last have available Bruno's remarkable General Account of Bonding, which investigates the ways in which minds act on, and react to, one another in a desire for gratification." Choice

Cause, principle and unity; On magic; A general account of bonding.