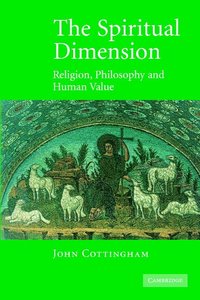 av John Cottingham
Häftad Engelska, 2005-09-01
289
Köp
Spara som favorit
Finns även som
Visa alla 1 format & utgåvor
The Spiritual Dimension offers a new model for the philosophy of religion, bringing together emotional and intellectual aspects of our human experience, and embracing practical as well as theoretical concerns. It shows how a religious worldview is best understood not as an isolated set of doctrines, but as intimately related to spiritual praxis and to the search for self-understanding and moral growth. It argues that the religious quest requires a certain emotional openness, but can be pursued without sacrificing our philosophical integrity. Touching on many important debates in contemporary philosophy and theology, but accessible to general readers, The Spiritual Dimension covers a range of central topics in the philosophy of religion, including scientific cosmology and the problem of evil; ethical theory and the objectivity of goodness; psychoanalytic thought, self-discovery and virtue; the multi-layered nature of religious discourse; and the relation between faith and evidence.
Visa hela texten

'I've been telling everyone enthusiastically about ... [Cottingham's] ... new book The Spiritual Dimension ... not because I agree with everything in it, but because it so compellingly articulates matters of the first importance ...' Daily Telegraph

'John Cottingham has followed up his excellent On the Meaning of Life with this equally fine book. ... let me end by strongly recommending anyone interested in religion to read this human, wide-ranging, judicious, and highly suggestive book.' The Philosophical Quarterly

'He (Cottingham) has worked hard to make the book accessible to a non-specialist audience ... The tone is at all times reasonable, generous, and fair. ... it will be welcome to all those who have to engage their atheist or agnostic friends, and who want to do so away from the clichs and cheap put-downs that informs so much of this kind of debate. Humane and generous, it is a fine example of faith seeking understanding.' Church Times

'His book will engage anyone who thinks spirituality is worth talking about - theist, atheist or agnostic. Clearly and humanely, he lays out the ground upon which any truly interesting philosophy of religion must be done.' The Philosophers' Magazine

'This book can be highly recommended as an important contribution to the philosophy of religion from the perspective emphasizing praxis and participation rather than the atomistic analysis of beliefs.' Theology, Ethics and Philosophy

'As efforts to re-contextualise spirituality within technology and religion are increasing, Cottingham's scholarly and aptly titled work makes a most useful contribution to these endeavours ... Beautifully written ... remarkably clear, this is an indispensable and timely study ... A particular attraction of this study is the way in which Cottingham appeals to reason to justify his concern with spirituality ... A broadly conceived book, it has much to recommend. It is rich, laden with insight, and bears careful study.' Journal of Contemporary Religion

'Cottingham's effort in this book is an example of how philosophy can be supportive to religion, enlisting psychology as an ally in the process ...' Journal of Religious Studies

'... this is an original and stimulating work, which will profit specialist and general readers alike. It is highly recommended.' Philosophical Investigations

'... a very recommendable book. It is rich in analysis, observations and reflections, and it is clear in argument. It is not only for professional philosophers, but for theologians and students as well. ... by introducing themes close to psychology like dependency, vulnerability, personal growth and self-insight as part of the repertoire of philosophy of religion, he advances a position that is in content very similar to parts of the continental (and phenomenological) philosophy of religion, but nevertheless his is an understand...

John Cottingham is Professor of Philosophy at the University of Reading. His many publications include: Western Philosophy: an anthology (Blackwell, 1996), Philosophy and the Good Life (Cambridge, 1998) and On the Meaning of Life (Routledge, 2003).