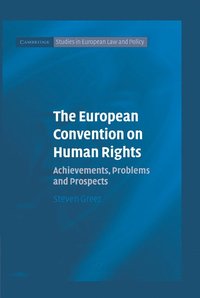 The European Convention on Human Rights

av Steven Greer
Häftad Engelska, 2006-11-01
419
Köp
Spara som favorit
Skickas inom 10-15 vardagar.
Fri frakt inom Sverige för privatpersoner.
Finns även som
Visa alla 2 format & utgåvor
This book critically appraises the European Convention on Human Rights as it faces some daunting challenges. It argues that the Convention's core functions have subtly changed, particularly since the ending of the Cold War, and that these are now to articulate an 'abstract constitutional model' for the entire continent, and to promote convergence in the operation of public institutions at every level of governance. The implications - from national compliance, to European international relations, including the adjudication of disputes by the European Court of Human Rights - are fully explored. As the first book-length socio-legal examination of the Convention's principal achievements and failures, this study not only blends legal and social science scholarship around the theme of constitutionalization, but also offers a coherent set of policy proposals which both address the current case-management crisis and suggest ways forward neglected by recent reforms.
Visa hela texten

'Professor Greer's new book is wonderful. It is a much needed work, expertly and objectively appraising the history and performance of the European Convention and Court of Human Rights, and intelligently setting out a thought-provoking agenda for their reform. The book will be extraordinarily useful both for those interested in the Strasbourg legal system and for anyone curious about the potential for international human rights law in today's world' Mark Weston Janis, William F. Starr Professor of Law, University of Connecticut

'Professor Greer's arguments and proposals will surely command much attention from all of the actors in this process: national authorities, the institutions of the Council of Europe, the Court itself, and civil society ... I commend Professor Greer for this excellent book, and commend it to all those to whom the Convention's present and future are entrusted. ' Luzius Wildhaber, President of the European Court of Human Rights

'Professor Greer's book makes a major contribution to framing the 21st century debate on the European Convention on Human Rights. It provides not only cogent assessments of achievements and shortcomings to date, but also thought-provoking proposals for enhancing European human rights protection in the future.' Colm Campbell (Prof), Transitional Justice Institute, University of Ulster

'Greer's book is a major contribution to the research on the state of human rights in Europe by making the diagnosis of a looming crisis that has not yet caught the public eye.' German Law Journal

' ... the book is packed to the gills with information and well-informed discussion. The reader emerges with a clear idea of the state of the ECHR and its legal system, engorged on legal and socio-legal fact and analysis. Greer has skilfully blended the often-difficult ingredients of history, politics, law and social science. The result is a volume entirely worthy of the 'law and policy' title of the series, painting an enlightening picture of the Convention and its Court in the early twenty-first century.' Public Law

'... outstanding book ... substantial contribution to the existing literature ... excellent piece of human right scholarship ... important point of reference for some time to come ... well-written, clear and accessible ... arguments are made with punch and style ... combining rigourous argument with clear exposition.' International Journal of Law in Context

Steven Greer is Professor of Human Rights, School of Law, University of Bristol.

1. The first half century; 2. Convention compliance; 3. The applications and enforcement of judgment processes; 4. The method of adjudication; 5. The jurisprudence; 6. Improving compliance; 7. Conclusion.