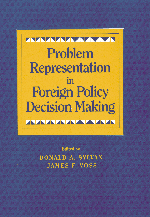 av Donald A Sylvan
Inbunden Engelska, 1998-09-01
539
Köp
Spara som favorit
Skickas inom 10-15 vardagar.
Fri frakt inom Sverige för privatpersoner.
Finns även som
Visa alla 1 format & utgåvor
Previous studies of foreign policy decision making have largely focused on the choice among specified options rather than the prior question of how the options were specified in the first place. Such 'problem representation' is the focus of this volume. How do the game theorists' options and utilities come about? Concretely, for example, how and why in the Cuban missile crisis were blockade, air strike, and invasion chosen as options? To answer such questions, the editors contend the representation of the problem to which the options are a response, the determinants of that representation, and its ramifications must all be analyzed. The contributors to the volume consider these issues both conceptually and empirically, employing the methods of both international relations and political psychology.
Visa hela texten

"This volume is an excellent addition to the more advanced study of foreign policy analysis. Recommended for upper-division undergraduates and above." Choice