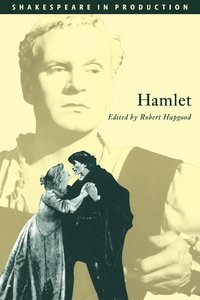 av William Shakespeare
Häftad Engelska, 1999-05-01
349
Köp
Spara som favorit
Kan tyvärr inte längre levereras innan julafton.
Finns även som
Visa alla 8 format & utgåvor
This edition tells the story of Hamlet in production, from Burbage at the Globe to Branagh on film, relating stage interpretations to developments in the theatre, in literary criticism and in society at large. Hamlet is the most performed play of all time. The stage history records an ongoing process of discovery, as successive performers have found what it is in the play that will speak most powerfully to the audiences of their own times. The introduction focuses not only on star Hamlets, but on whole productions of the play including supporting players and, in this century, direction and design. Although the volume as a whole concentrates on stage performances in England and the US, outstanding film versions and European stage productions are also featured. Professor Hapgood makes extensive use of primary sources and his substantial commentary provides numerous details of line-readings, costuming and stage business culled from this research.
Visa hela texten

'Cambridge has come up with an excellent new series, Shakespeare in Production, which is going to be invaluable to anybody studying, acting, or producing his plays.' Plays and Players Applause Magazine

'Shakespeare in Production ... is ... ideally suited to people like me: people as interested in the stage history of a Shakespearean play as in its text. What distinguishes these editions, and makes them of particular interest to drama and theatre departments, is their unique concentration on theatrical production.' Studies in Theatre Production

'An extensive performance history is followed by the text, with an accompanying compendium of notable interpretations of individual scenes and lines. For Hamlet, rarely absent from stage or screen, the material is exhaustive, and Hargood's commentary swarms with possibilities ... result is Hamlet as a vivid palimpsest.' Books

'Hapgood's careful scolarship and engaging writing throughout result in a volume that all libraries will want to own.' Choice

'I cannot recommend too highly the whole series (a bargain at 16.99 for each play) to all theatre lovers, theatregoers, theatre practitioners, and anybody who enjoys Shakespeare.' Robert Tanitch, What's on in London