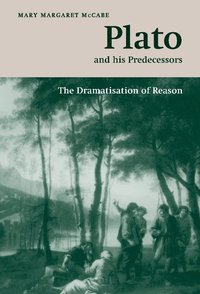 Plato and his Predecessors

The Dramatisation of Reason

av Mary Margaret McCabe
Inbunden Engelska, 2000-08-01
689
Köp
Spara som favorit
Skickas inom 10-15 vardagar.
Fri frakt inom Sverige för privatpersoner.
Finns även som
Visa alla 1 format & utgåvor
How does Plato view his philosophical antecedents? Plato and his Predecessors considers how Plato represents his philosophical predecessors in a late quartet of dialogues: the Theaetetus, the Sophist, the Politicus and the Philebus. Why is it that the sophist Protagoras, or the monist Parmenides, or the advocate of flux, Heraclitus, are so important in these dialogues? And why are they represented as such shadowy figures, barely present at their own refutations? The explanation, the author argues, is a complex one involving both the reflective relation between Plato's dramatic technique and his philosophical purposes, and the very nature of his late philosophical views. For in these encounters with his predecessors we see Plato develop a new account of the principles of reason, against those who would deny them, and forge a fresh view of the best life - the life of the philosopher.
Visa hela texten

'McCabe proves herself once again to be at the forefront in working out a new hermeneutic method within the analytical tradition of Platonic interpretation.' Hermathena

'This is a rich and complex book, addressing a series of interlocking issues in four of Plato's later dialogues ... Scholars will find plenty to get their teeth into. McCabe supports her theses by a combination of close analysis of texts and sweeping argumentation. At both levels there are occasional moments of hesitation, but there is no doubt that she has opened up a rich new approach to the later dialogues. And the complexity of the work is nicely offset by a pleasing writing style.' The Heythrop Journal

'... a splendid book, sometimes difficult, never dull, attractively written, a triumph of philosophical scholarship and philosophical imagination. No student of the later Plato can afford - or could wish - to neglect it.' International Journal of Philosophy