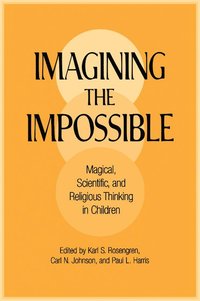 av Karl S Rosengren
Häftad Engelska, 2000-05-01
449
Köp
Spara som favorit
Skickas inom 7-10 vardagar.
Fri frakt inom Sverige för privatpersoner.
Finns även som
Visa alla 1 format & utgåvor
This volume, first published in 2000, is about the development of human thinking that stretches beyond the ordinary boundaries of reality. Various research initiatives emerged in the decade prior to publication exploring such matters as children's thinking about imaginary beings, magic and the supernatural. The purpose of this book is to capture something of the larger spirit of these efforts. In many ways, this new work offers a counterpoint to research on the development of children's domain-specific knowledge about the ordinary nature of things that has suggested that children become increasingly scientific and rational over the course of development. In acquiring an intuitive understanding of the physical, biological or psychological domains, even young children recognize that there are constraints on what can happen. However, once such constraints are acknowledged, children are in a position to think about the violation of those very same constraints - to contemplate the impossible.
Visa hela texten

"The real contribution of the volume is introducing the notion that children's ideas about fantasy, magic, religion, and science are interrelated in important ways." APA Review of Books

"...this is an important book..." Canadian Child Psychiatry Review

"This is good science. And it is interesting." Imagination, Cognition and Personality

Preface; 1. The makings of the magical mind: the nature of function of sympathetic magical thinking Carol Nemeroff and Paul Rozin; 2. Phenomenalistic perception and rational understanding in the mind of an individual: a fight for dominance Eugene Subbotsky; 3. Metamorphosis and magic: the development of children's thinking about possible events and plausible mechanisms Karl S. Rosengren and Anne K. Hickling; 4. The development of beliefs about metaphysical causality in imagination, magic and religion Jacqui Woolley; 5. Intuitive ontology and cultural input in the acquisition of religious concepts Pascal Boyer and Sheila Walker; 6. On not falling down to earth: children's metaphysical questions Paul L. Harris; 7. Putting different things together: the development of metaphysical thinking Carl N. Johnson; 8. Versions of personal story telling: versions of experience: genres as tools for creating alternate realities Peggy J. Miller, Julia Hengst, Kristin Alexander and Linda L. Sperry; 9. The influence of culture on fantasy play: the case of Mennonite children Marjorie Taylor and Stephanie M. Carlson; 10. Religion, culture, and beliefs about reality in moral reasoning Elliot Turiel and Kristin Neff; 11. Beyond scopes: why creationism is here to stay E. Margaret Evans; 12. Knowledge change in response to date in science, religion, and magic Clark A. Chinn and William F. Brewer; 13. Theology and physical science: a story of developmental influence at the boundaries David E. Schrader.