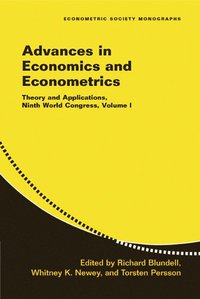 Advances in Economics and Econometrics

av Richard Blundell
Häftad Engelska, 2006-08-01
569
Köp
Spara som favorit
Skickas inom 5-8 vardagar.
Fri frakt inom Sverige för privatpersoner.
Beställ boken senast fredag 11 december kl. 11:30 för leverans innan julafton
This is the first of three volumes containing edited versions of papers and a commentary presented at invited symposium sessions of the Ninth World Congress of the Econometric Society, held in London in August 2005. The papers summarise and interpret key developments, and they discuss future directions for a wide variety of topics in economics and econometrics. The papers cover both theory and applications. Written by leading specialists in their fields, these volumes provide a unique survey of progress in the discipline.
Visa hela texten

"I think this book may be a useful reference for further contributions on the economic theory" - Jose A. Ordaz, Universidad Pablo de Olavide, Technometrics

Richard Blundell CBE FBA holds the David Ricardo Chair in Political Economy at University College London and is Research Director of the Institute for Fiscal Studies, London. He is also Director of the Economic and Social Research Council's Centre for the Microeconomic Analysis of Public Policy. Professor Blundell serves as President of the Econometric Society for 2006. Whitney K. Newey is Professor of Economics at the Massachusetts Institute of Technology. A 2000-01 Fellow at the Center for Advanced Study in the Behavioral Sciences in Palo Alto, he is Associate Editor of Econometrica and the Journal of Statistical Planning and Inference, and formerly served as Associate Editor of Econometric Theory. Torsten Persson is Professor and Director of the Institute for International Economic Studies at Stockholm University and Centennial Professor of Economics at the London School of Economics. He was elected a Foreign Honorary Member of the American Academy of Arts and Sciences in 2001 and served as President of the European Economic Association in 2003.