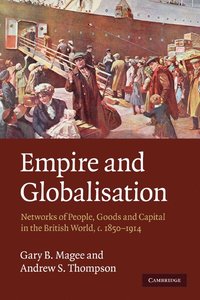 av Gary B Magee
Häftad Engelska, 2010-02-11
269
Köp
Spara som favorit
Skickas inom 10-15 vardagar.
Fri frakt inom Sverige för privatpersoner.
Finns även som
Visa alla 2 format & utgåvor
Focusing on the great population movement of British emigrants before 1914, this book provides a perspective on the relationship between empire and globalisation. It shows how distinct structures of economic opportunity developed around the people who settled across a wider British World through the co-ethnic networks they created. Yet these networks could also limit and distort economic growth. The powerful appeal of ethnic identification often made trade and investment with racial 'outsiders' less appealing, thereby skewing economic activities toward communities perceived to be 'British'. By highlighting the importance of these networks to migration, finance and trade, this book contributes to debates about globalisation in the past and present. It reveals how the networks upon which the era of modern globalisation was built quickly turned in on themselves after 1918, converting racial, ethnic and class tensions into protectionism, nationalism and xenophobia. Avoiding such an outcome is a challenge faced today.
Visa hela texten

'This is a brilliant and highly original study of what the authors describe as 'imperial globalisation'. Drawing upon a huge range of literature, Thompson and Magee explore the social networks, business connections, migrational habits and shared material culture that bound together British communities at home and overseas in the long nineteenth century. In this pathbreaking book, they bring new conceptual rigour as well as empirical depth to the emerging history of the 'British World'. An outstanding achievement.' John Darwin, Nuffield College, University of Oxford

'Written by two scholars with an impressively sure touch, this is a fresh and arresting look at the economic, social and cultural ways in which the mature British Empire promoted a recognisably modern process of international integration or globalisation. This book is especially stimulating not merely for its breadth of research and conceptual sophistication, but for its striking contribution to our understanding of the intersections between the long-distance migrant networks, finance, trade and consumption cultures which formed a British world economy. Smart, richly informative and boldly argumentative, there is nothing to equal this novel illumination of the past Pax Britannica.' Bill Nasson, University of Stellenbosch

'Magee and Thompson blend approaches from the social sciences, economics and history adeptly to deliver a long overdue analysis of the cultural economy of Britain's Empire. Studying the networks of individual mobility, information, goods and capital that connected Britons 'at home' and in the settler colonies, they demonstrate that cultural reproduction and economic integration were mutually reinforcing. In doing so, they excavate key foundations of our contemporary, unevenly globalised world.' Alan Lester, Professor of Historical Geography, University of Sussex

'... a book which provides a great example of how the British World approach functions. A notable feature of the book is the exhaustive historiographical detail that is interwoven throughout the narrative and that positions the British World framework within the broader terrain of British imperial history.' Jared van Duinen, Journal of Colonialism and Colonial History

Gary B. Magee is Professor of Economics and Head of the School of Economics and Finance at La Trobe University. His books include Productivity and Performance in the Paper Industry: Labour, Capital and Technology in Britain and America (1997) and Knowledge Generation, Technological Change and Economic Growth in Colonial Australia (2000). Andrew S. Thompson is Professor of Commonwealth and Imperial History at the School of History, University of Leeds. His previous publications include The Empire Strikes Back. The Impact of Imperialism on Britain from the Mid-Nineteenth Century (2005) and The Impact of the South African War, 1899-1902 (co-edited with D. Omissi, 2002).