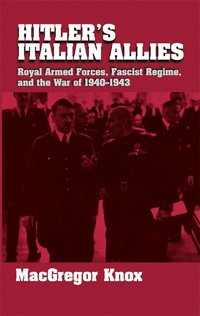 av Macgregor Knox
Häftad Engelska, 2009-02-02
249
Köp
Spara som favorit
Skickas inom 7-10 vardagar.
Fri frakt inom Sverige för privatpersoner.
Finns även som
Visa alla 2 format & utgåvor
Fascist Italy's ultimate defeat was foreordained. It was a pygmy among giants, and Hitler's failure to destroy the Soviet Union in 1941 doomed all three Axis powers. But Italy's defeat was unique; the only asset that it conquered - briefly - with its own unaided forces in the entire Second World War was a dusty and useless corner of Africa, British Somaliland. And Italy's forces dissolved in 1943 almost without resistance, in stark contrast to the grim fight to the last cartridge of Hitler's army or the fanatical faithfulness unto death of the troops of Imperial Japan. This book tries to understand why the Italian armed forces and Fascist regime were so remarkably ineffective at an activity - war - central to their existence. It approaches the issue above all from the perspective of military culture, through analysis of the services' failure to imagine modern warfare and through a topical structure that offers a social-cultural, political, military-economic, strategic, operational, and tactical cross-section of the war effort.
Visa hela texten

"This book is important to an understanding of how and why Italy collapsed during World War II."
-Washington Post

"[A] valuable introduction to a neglected aspect of World War II."
-Booklist

"Knox tells the story clearly and concisely and his analysis of the weaknesses of the Italian military is likely to convince anyone who has witnessed the workings of Italian society...Knox's book poses interesting questions and convincingly critiques the operations of Italy's pre-war military establishment."
-International History Review

"A brief but cogent examination of Italy in World War II. Knox, whose talents were recently displayed in Common Destiny, a dual history of Germany and Italy, hones in here on the Italian side, his main field of expertise...This book is important to an understanding of how and why Italy collapsed during World War II."
-Washington Post Book World

"This concise analytical study will be of much value to readers who are interested in the military relationship between Mussolini's Italy and Hitler's Germany during the period when they were allies."
-The Historian

"...the survey of the Italian Armed Forces during World War II, manages to look deeply into its organizational, technological, doctrinal, and tactical shortcomings, as well as its leadership and cultural problems, while rebutting the wartime Allied propaganda. A very useful work for anyone interested in the Second World War."
-NYMAS Newsletter

MacGregor Knox has served as Stevenson Professor of International History at the London School of Economics and Political Science since 1994. He was educated at Harvard College (BA, 1967) and Yale University (PhD in History, 1977), and has also taught at the University of Rochester (USA). His writings deal with the wars and dictatorships of the savage first half of the twentieth century and with contemporary international and strategic history, and include Mussolini Unleashed, 1939-1941 (1982); The Making of Strategy: Rulers, States, and War (edited, with Williamson Murray and Alvin Bernstein, 1994); Common Destiny: Dictatorship, Foreign Policy, and War in Fascist Italy and Nazi Germany (2000); The Dynamics of Military Revolution, 1300-2050 (edited, with Williamson Murray, 2001); and To the Threshold of Power: Origins and Dynamics of the Fascist and National Socialist Dictatorships (2007). Between his undergraduate and graduate studies he spent three years in the US Army, and served in the Republic of Vietnam (1969) as rifle platoon leader with the 173rd Airborne Brigade.