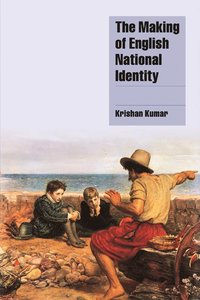 The Making of English National Identity

Englishness and Britishness in Comparative and Historical Perspective

av Krishan Kumar
(1 röst)
Häftad Engelska, 2003-03-01
469
Köp
Spara som favorit
Skickas inom 7-10 vardagar.
Fri frakt inom Sverige för privatpersoner.
Finns även som
Visa alla 1 format & utgåvor
Why is English national identity so enigmatic and so elusive? Why, unlike the Scots, Welsh, Irish and most of continental Europe, do the English find it so difficult to say who they are? The Making of English National Identity, first published in 2003, is a fascinating exploration of Englishness and what it means to be English. Drawing on historical, sociological and literary theory, Krishan Kumar examines the rise of English nationalism and issues of race and ethnicity from earliest times to the present day. He argues that the long history of the English as an imperial people has, as with other imperial people like the Russians and the Austrians, developed a sense of missionary nationalism which in the interests of unity and empire has necessitated the repression of ordinary expressions of nationalism. Professor Kumar's lively and provocative approach challenges readers to reconsider their pre-conceptions about national identity and who the English really are.
Visa hela texten

'[What] is it to be English? Krishan Kumar's careful and copious study of this conundrum is a timely one ... Kumar naturally pays much attention to the uneasy equivocality of the word 'English' and its synecdochal use for 'British'. Much of his energy is devoted to rebutting those who have claimed to find versions of English nationalism at various epochs, from medieval times to the eighteenth century.' Financial Times

'Kumar offers an accessible and closely-argued account of alternative explanations of English nationalism. It is a book distinguished both by its conceptual clarity and by the rigour of its argument. The Times Literary Supplement

'[A] scholarly masterpiece ... not another quick burst of populist English angst, but the deepest and best reflection so far by a fine socialist and an intellectual historian.' Bernard Crick, The Guardian

'... his book will surely make a significant contribution to a number of important contemporary debates concerning questions of Englishness, identity and empire'. Cercles

'Kumar's theorising [is] impressive in its command of the existing literature ...' Spectator 'One of the finest recent books written on this subject is by an American professor of South Indian background. Krishan Kumar's The Making of English National Identity sensitively examines the awakening of English self-awareness ...'. The Independent

'Kumar is a lucid and conscientious expositor of the major accounts of English national identity which have been proposed to date. More important, he is also a penetrating critic of their shortcomings.' Tribune

'... the deepest and best reflection so far by a fine sociologist and an intellectual historian.' The Guardian Review

'... a work that is hugely convincing and comprehensive ... Kumar has written a book which, in its detail, clarity and wide-ranging nature, makes an important contribution to a debate that is of considerable topical importance.' Scottish Affairs

'... lucidly written, combining subtlety in its synthesis of an enormous range of sources with careful but definite conclusions ... an instance of historical sociology at its best ...'. Nations & Nationalism

'This is an impeccably scholarly yet remarkably accessible book, which sets out to explain the emergence and peculiarities of that most elusive phenomenon, English nationalism.' Political Studies Review

Krishan Kumar is a distinguished author and Professor of Sociology at the University of Virginia.