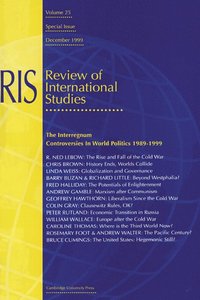 The Interregnum: Controversies in World Politics 1989-1999

av Michael Cox
Häftad Engelska, 2000-04-01
329
Köp
Spara som favorit
Skickas inom 10-15 vardagar.
Fri frakt inom Sverige för privatpersoner.
The Interregnum: Controversies in World Politics 1989-1999 is a series of critical reflections on the major controversies in and about world politics in the 1990s. We are living in an era which seemingly defies description: in social and political theory, our age is frequently referred to as 'post-modern'; in international relations, we remain in the 'post-Cold War' age. The age is only characterised by what it is not. This collection of critical reflections, written by leading scholars in the field, sheds light on the meanings of world politics in what we are calling The Interregnum. The central question of the Special Issue might be put as follows: what do the major controversies in world politics in the 1990s tell us about the characteristics of the age, who we are, and where world politics might be going?
Visa hela texten

'The Interregnum does what no other collection has managed thus far - it offers numerous paths of escape from the already exhausted label 'post-Cold War era'. This collection takes stock of the major intellectual fault lines emerging since 1989, sorting them and integrating them in new ways that avoid the excesses of clich that characterize much recent discussion of globalization and so-called clashes of civilization. For those who seek to understand the nature of the current international system, this is the place to start.' Joel H. Rosenthal President, Carnegie Council on Ethics and International Affairs, New York

'The Interregnum is a fascinating and varied collection of essays on the confusions of the last decade. Some of the contributions go over familiar ground - others may merely annoy; but several are notably illuminating and thought-provoking.' Robert O. Keohane, Department of Political Science, Duke University

'Both individually and collectively, the thirteen essays assembled here raise far more questions than they answer. But they are profound and troubling questions about the structure and dynamics of world politics that have ensured in the ten years since the end of the Cold War ... a period filled with contradictions, ambiguities, and uncertainties hard to fathom and yet crucial to understanding where the world is heading in the 21st century. Readers will surely find themselves continuously provoked as they work their way through the book seeking to find for themselves the deeper meanings of the Interregnum, as the editors call the century's last decade.' James N. Rosenau, University Professor of International Affairs

'This is an impressive, comprehensive treatment of what international relations theorists have learned throughout the 'hot peace' decade that followed the cold war. Self-described realists remind us of the importance of remembering Marx, the social scientist, in this era of triumphal capitalism. Putative Marxists restate the relevance of Kant, the historian and ethicist, in a world in which depoliticizing postmodernists question the substance of triumphal liberalism. And scholars across paradigms emphasize the centrality of classical theorizing to the conflict and inequality of the current world.' Craig N. Murphy, M. Margaret Ball Professor of International Relations and Chair, Department of Political Science, Wellesley College

'With precise and careful identification of the most important issues, this timely volume offers clearheaded and comprehensive analysis of world politics over the last decade. Finally we approach a much better understanding of what has changed and what remains of the old order. Highly recommended to students and scholars alike.' George Sorensen, University of Aarhus