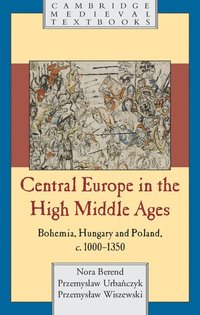 av Nora Berend
Häftad Engelska, 2013-12-19
329
Köp
Spara som favorit
Skickas inom 10-15 vardagar.
Fri frakt inom Sverige för privatpersoner.
Finns även som
Visa alla 2 format & utgåvor
This groundbreaking comparative history of the early centuries of Bohemia, Hungary and Poland sets the development of each polity in the context of the central European region as a whole. Focusing on the origins of the realms and their development in the eleventh and twelfth centuries, the book concludes with the thirteenth century when significant changes in social and economic structures occurred. The book presents a series of thematic chapters on every aspect of the early history of the region covering political, religious, economic, social and cultural developments, including an investigation of origin myths that questions traditional national narratives. It also explores the ways in which west European patterns were appropriated and adapted through the local initiatives of rulers, nobles and ecclesiastics in central Europe. An ideal introduction to the essential themes in medieval central European history, the book sheds important new light on regional similarities and differences.
Visa hela texten

'This welcome synthesis provides an up to-date history of the High Middle Ages in a region that is too little-known and understood in the Anglophone world. ... This volume, enhanced by three maps, is sure to become the standard in English. Summing up: essential. All levels/libraries.' P. W. Knoll, Choice

'The arrival of this book is more than welcome for those of us teaching medieval history beyond Western Europe ... The amount of work required to produce this must have been immense and the payoff is tremendous for the reader ... Central Europe in the High Middle Ages makes the medieval histories of these three incredibly important medieval polities available to an English language audience of students and scholars, and it will hopefully facilitate the expansion of the idea of medieval Europe throughout college classrooms.' Christian Raffensperger, Speculum

Nora Berend is Senior Lecturer in the Faculty of History at the University of Cambridge and Fellow of St Catharine's College, Cambridge. Her previous publications include At the Gate of Christendom: Jews, Muslims and 'Pagans' in Medieval Hungary, c.1000-c.1300 (Cambridge University Press, 2001) for which she received the Royal Historical Society's Gladstone Prize in 2002, and Christianization and the Rise of Christian Monarchy: Central Europe, Scandinavia and Rus', c.950-c.1200 (as editor, Cambridge University Press, 2007). Przemysaw Urbaczyk is Professor at the Cardinal Wyszyski University in Warsaw and in the Institute of Archaeology and Ethnology, Polish Academy of Sciences. He specializes in the medieval archaeology and history of Poland, East Central Europe, Scandinavia and the North Atlantic islands. His previous publications include Zdobywcy pnocnego Atlantyku (Conquerors of the North Atlantic) (2004) and Trudne pocztki Polski (Difficult Origins of Poland) (2008) which won the Klio prize for best history book of the year. Przemysaw Wiszewski is Professor at the University of Wrocaw, Department of Historical and Pedagogical Sciences. He specialises in comparative regional history, with a special emphasis on borderlands, from the tenth to the twentieth centuries. His previous publications include Domus Bolezlai: Values and Social Identity in Dynastic Traditions of Medieval Poland, c.966-1138) (2010), the Polish edition of which was honoured with the Prize of the Ministry of Science.

1. Introduction; 2. The history of the region and the question of origins; 3. The formation of polities and Christianization; 4. Political life and government c.1050-c.1200; 5. Society and the economy, eleventh-twelfth centuries; 6. Ecclesiastical history, eleventh-thirteenth centuries; 7. New developments of the thirteenth century; Select bibliography.