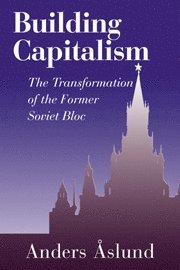 The Transformation of the Former Soviet Bloc

av Anders Aslund
Inbunden Engelska, 2001-12-01
1039
Köp
Spara som favorit
Finns även som
Visa alla 1 format & utgåvor
A most comprehensive empirical analysis of the economic transformation of the former Soviet bloc during the first decade after communism. It debunks many myths, seeing transition as a struggle between radical reformers and those thriving on rent seeking. People have gained from fast and comprehensive reforms, but several countries have gotten stuck in corruption. Economic decline and social hazards have been greatly exaggerated, since people have forgotten how awful communism was. Swift liberalization of prices and foreign trade, as well as rapid and profound fiscal adjustment, have been vital for growth, institutional reforms, legality and greater equity. Privatization has been beneficial, and its effects will grow over time. The main problem has been the continuation of unregulated and ubiquitous state apparatuses living on corruption, while no country has suffered from too radical reforms. Where malpractices of the elite can be checked, market reforms and democracy have proceeded together.
Visa hela texten

'Building Capitalism has all the right ingredients: it is on a critically important issue; it is based on an extraordinarily detailed knowledge of economic and political history, pre- and post- the break-up of the former Soviet Union; and it displays a full acquaintance with the literature, Anders Aslund's naturally exuberant style, and a clear point of view. Whether you agree or disagree with the argument, you should not be indifferent to this book. And by the end, you should fundamentally agree.' Stanley Fischer, International Monetary Fund

'He persuasively develops a strong thesis that runs counter to the conventionally accepted view that reform efforts were too rapid and too drastic. ... A fact-filled and challenging analysis for anyone interested in one of the great transformations of the past half-century.' Foreign Affairs

'... perhaps the most competent evaluation of the economic development of this vast region for the past decade.' Journal of Peace Research

'... the scope of his text, the breadth and depth of literature cited and the acuity of analysis he brings to bear make Building capitalism an important addition to the literature. And the arguments he deploys will be extremely hard for critics of the Washington Consensus to refute.' International Affairs

'The strength of his volume remains in its comparative analysis of economic policies, which provides an insight to liberal economic thinking that has been so important in Central and Eastern Europe's transition.' Balkan Academic News

'Building Capitalism is a tour de force that will come to form part of the corpus of essential background reading for those interested in this subject and its myriad ramifications ...' The Journal of Energy Literature

List of tables and charts; Acknowledgements; List of abbreviations; Introduction; 1. What communism actually was; 2. The decline and fall of socialism; 3. Strategic policy choices; 4. Changes in output and their causes; 5. Liberalization; 6. Financial stabilization; 7. Privatization; 8. Social developments and policy; 9. State and politics in the transformation; 10. Role of the outside world; 11. Conclusions; Bibliography; Index.