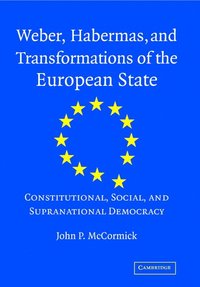 Weber, Habermas and Transformations of the European State

"This ambitious work is a reflection on the fate of the state in an era of globalization and internationalization. While its focus is the European Union, it also investigates the intellectual history of the last century in an illuminating comparison of its two major 'book ends' in state theory -- Weber and Habermas. McCormick shows that Weber, despite Habermas's attempt to transcend the problematic aspects of his theory, provides a resource for a compelling critique of Habermas, and that both remain highly relevant for understanding the fate of the state today."
-David Dyzenhaus, University of Toronto

"In a book remarkable both for its scholarly maturity and its intellectual boldness, the author assesses and complements Habermas's authoritative critique of Max Weber's views about the modern state and its law. He establishes the virtues and the limitations of the contribution both authors can make to contemporary political theory as it confronts a great challenge: Is it possible to uphold and extend the values of democracy and of the rule of law within institutional contexts, such as the European Union, which transcend the nation-state?"
-Gianfranco Poggi, University of Trento, Italy

"Weber, Habermas, and Transformations of the European State is a singular achievement. John McCormick displays an admirable mastery of the complex empirical and theoretical literature pertaining to Europe's future. He deftly exposes the shortcomings of earlier attempts to understand European politics according to the outmoded nation-state model. Thereby, he places the burning contemporary debate over the juridical basis of the European Union on an entirely new theoretical footing. McCormick has written a model study in empirically informed, normative political theory."
-Richard Wolin, The Graduate Center, The City University of New York

"...one cannot fail to appreciate the force and urgency of [John McCormick's] appeal for a supranational governance that is desperately needed in the European Union today. This book brings into clear focus one vision and will stimulate further discussion of what form that governance should take, as well making a major contribution to the on-going scholarly engagement with Weber and Habermans."
-Anthony J. Carroll, Heythrop College, University of London, The Heythrop Journal

John P. McCormick is Professor of Political Science at the University of Chicago.

1. Introduction: theorizing modern transformations of law and democracy; 2. The historical logic(s) of Habermas's critique of Weber's 'sociology of law'; 3. The puzzle of law, democracy and historical change in Weber's 'sociology of law'; 4. Habermas's deliberatively legal Sozialstaat; 5. Habermas on the European Union: normative aspirations; 6. The structural transformation to the supranational Sektoralstaat and prospects for democracy in the EU; 7. Conclusion: Habermas's philosophy of history and the future of Europe.