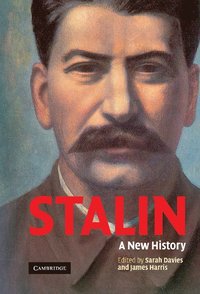 av Sarah Davies
Inbunden Engelska, 2005-09-01
539
Köp
Spara som favorit
Skickas inom 10-15 vardagar.
Fri frakt inom Sverige för privatpersoner.
Finns även som
Visa alla 2 format & utgåvor
The figure of Joseph Stalin has always provoked heated and often polarized debate. The recent declassification of a substantial portion of Stalin's archive has made possible this fundamental new assessment of the Soviet leader. In this groundbreaking 2005 study, leading international experts challenge many assumptions about Stalin from his early life in Georgia to the Cold War years with contributions ranging across the political, economic, social, cultural, ideological and international history of the Stalin era. The volume provides a deeper understanding of the nature of Stalin's power and of the role of ideas in his politics, presenting a more complex and nuanced image of one of the most important leaders of the twentieth century. This study is without precedent in the field of Russian history and will prove invaluable reading for students of Stalin and Stalinism.
Visa hela texten

"With this outstanding collection, Davies and Harris not only present a more compelling and comprehensive individual but greatly advance our understanding the Soviet state under Stalin."
Golfo Alexopoulos, American Historical Review

"the book will be of interest and value for students of Russian history." -The NYMAS Review