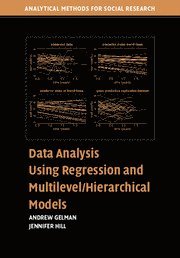 'Data Analysis Using Regression and Multilevel/Hierarchical Models' ... careful yet mathematically accessible style is generously illustrated with examples and graphical displays, making it ideal for either classroom use or self-study. It appears destined to adorn the shelves of a great many applied statisticians and social scientists for years to come.' Brad Carlin, University of Minnesota

'Gelman and Hill have written what may be the first truly modern book on modeling. Containing practical as well as methodological insights into both Bayesian and traditional approaches, Data Analysis Using Regression and Multilevel/Hierarchical Models provides useful guidance into the process of building and evaluating models. For the social scientist and other applied statisticians interested in linear and logistic regression, causal inference, and hierarchical models, it should prove invaluable either as a classroom text or as an addition to the research bookshelf.' Richard De Veaux, Williams College

'The theme of Gelman and Hill's engaging and nontechnical introduction to statistical modeling is 'Be flexible'. Using a broad array of examples written in R and WinBugs, the authors illustrate the many ways in which readers can build more flexibility into their predictive and causal models. This hands-on textbook is sure to become a popular choice in applied regression courses.' Donald Green, Yale University

'... a detailed, carefully written exposition of the modelling challenge, using numerous convincing examples, and always paying careful attention to the practical aspects of modelling. I recommend it very warmly.' Journal of Applied Statistics

'Data Analysis Using Regression and Multilevel/Hierarchical Models is the book I wish I had in graduate school. ... The text is an obvious candidate for use in courses or course modules on multilevel modeling, especially in Part 2. Beyond that, where should it be used? Instructors of first-year graduate methods courses should consider complementing their texts with material from Part 1. Many use Kennedy's A Guide to Econometrics (2003) to provide an alternative take in the essentials. Data Analysis is better suited for taking on this role. Students will find its coverage less redundant of what they get from standard texts, and the use of non-economics based examples should also help sell quantitative research to skeptical incomers into the profession.' The Political Methodologist

Andrew Gelman is Professor of Statistics and Professor of Political Science at Columbia University. He has published over 150 articles in statistical theory, methods, and computation, and in applications areas including decision analysis, survey sampling, political science, public health, and policy. His other books are Bayesian Data Analysis (1995, second edition 2003) and Teaching Statistics: A Bag of Tricks (2002). Jennifer Hill is Assistant Professor of Public Affairs in the Department of International and Public Affairs at Columbia University. She has co-authored articles that have appeared in the Journal of the American Statistical Association, American Political Science Review, American Journal of Public Health, Developmental Psychology, the Economic Journal and the Journal of Policy Analysis and Management, among others.