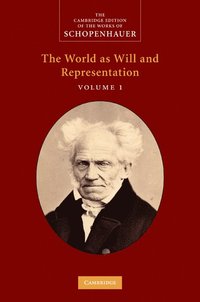 Schopenhauer: 'The World as Will and Representation': Volume 1

av Christopher Janaway
Inbunden Engelska, 2010-10-28
1429
Köp
Spara som favorit
Finns även som
Visa alla 3 format & utgåvor
First published in 1818, The World as Will and Representation contains Schopenhauer's entire philosophy, ranging through epistemology, metaphysics, philosophy of mind and action, aesthetics and philosophy of art, to ethics, the meaning of life and the philosophy of religion, in an attempt to account for the world in all its significant aspects. It gives a unique and influential account of what is and is not of value in existence, the striving and pain of the human condition and the possibility of deliverance from it. This translation of the first volume of what later became a two-volume work reflects the eloquence and power of Schopenhauer's prose and renders philosophical terms accurately and consistently. It offers an introduction, glossary of names and bibliography, and succinct editorial notes, including notes on the revisions of the text which Schopenhauer made in 1844 and 1859.
Visa hela texten

"...This book will be of interest to general readers, undergraduates, graduates, and scholars in the field."
--George Lzroiu, PhD, Institute of Interdisciplinary Studies in Humanities and Social Sciences, New York, Analysis and Metaphysics

Judith Norman is Professor of Philosophy at Trinity University, Texas. She is co-editor of The New Schelling (2004) with Alistair Welchman. She has also previously translated works by Nietzsche including Beyond Good and Evil (Cambridge University Press, 2002) and The Antichrist, Ecce Homo, Twilight of the Idols, The Case of Wagner and Nietzsche Contra Wagner (Cambridge University Press, 2005). Alistair Welchman is Assistant Professor of Philosophy at the University of Texas at San Antonio. He is co-editor of The New Schelling (2004), and has also published numerous articles on contemporary European thought. Christopher Janaway is Professor of Philosophy at the University of Southampton. His previous publications include Self and World in Schopenhauer's Philosophy (1989) and Schopenhauer: A Very Short Introduction (2002). He is editor of The Cambridge Companion to Schopenhauer (1999) and has edited and translated Schopenhauer: The Two Fundamental Problems of Ethics (2009).