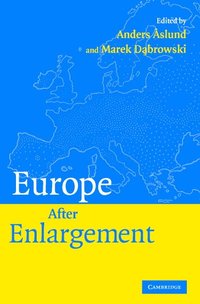 av Anders Aslund
Inbunden Engelska, 2007-03-01
579
Köp
Spara som favorit
Finns även som
Visa alla 2 format & utgåvor
Where is Europe going? In this 2007 collection, several prominent European economists offer essays on the five big challenges to the development of the European Union (EU). Namely, the new European Constitution, European finances and the euro, the need to boost economic growth, competition in both new member states and countries further to the East, and the goal of forming a cooperative and productive relationship with countries on the European periphery. The book includes essays by Charles Wyplosz, who argues that enlargement and deepening are not substitutes but complements; Vito Tanzi who questions the Keynesian foundation of the Growth and Stability Pact; Daniel Gros, who criticises the achievements within the Lisbon Agenda, as well as essays by Anders Aslund, who claims that Russian and Ukrainian oligarchs differ little from US 'robber barons'. The final two chapters discuss the EU's European Neighbourhood Policy and long-term economic integration in Eurasia. Listed in the Economist Top 100 Books of 2007.
Visa hela texten

A pantheon of economic thinkers grapples with the problems facing Europe. No longer about East vs. West or even rich vs. aspiring, the issue now is whether all of Europe can stay (relatively) rich while it ages. As the authors make clear, for really dealing with this complex problem and all its facets, it's much later than you think. -- Simon Johnson, Sloan School of Management, MIT

Enlargement has irreversibly transformed the European Union and this must lead to a rethinking of its principles and policies. slund and Dbrowski offer analyses, ideas and proposals that cover a wide range of issues. This is a most welcome contribution to the debate on the course the new Europe should take in the years to come -- Jean Pisani-Ferry, Director of Bruegel, Brussels

Anders Aslund is a Senior Fellow and specialist on post-communist economic transformation, especially the Russian and Ukrainian economies, at the Institute for International Economics in Washington, DC. From 1994 till 2005, he worked at the Carnegie Endowment for International Peace, as a senior associate and later as Director of the Russian and Eurasian Program. Dr Aslund is an adjunct professor at Georgetown University, and has also served as an economic advisor to the Russian government in 1991-94, to the Ukrainian government in 1994-97, and to President Askar Akaev of the Kyrgyz Republic in 1998-2004. He is the author of six books, including Building Capitalism: The Transformation of the Former Soviet Bloc (Cambridge University Press, 2002), How Russia Became a Market Economy (1995), Gorbachev's Struggle for Economic Reform (1989), and Private Enterprise in Eastern Europe: The Non-Agricultural Private Sector in Poland and the GDR, 1945-83 (1985). In addition, he has edited eleven books, most recently, Revolution in Orange. Marek Dabrowski is a founder and Chairman of the Council of the Center for Social and Economic Research (CASE) in Warsaw, Poland. He also chairs the Supervisory Board of CASE Ukraine in Kiev, is a member of the Board of Trustees of the Institute for the Economy in Transition. Dr Dabrowski has actively participated in discussion on economic reforms in Poland since 1978. From September 1989 to September 1990 he was the First Deputy Finance Minister of Poland and later served as a Member of Parliament (1991-1993), Chairman of the Governmental Council of Ownership Changes (1991-1996) and a member of the Monetary Policy Council of the National Bank of Poland (1998-2004). Marek Dabrowski has been involved in policy advice, policy research and training for the World Bank and UNDP and 16 European and Asian nations. He is an author and co-author of numerous publications on the EU and European monetary union.