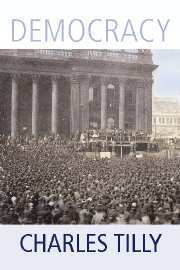 'In this compelling work, Charles Tilly brings his unrivaled historical knowledge to bear on fundamental questions of democracy. His argument focuses on long-run social processes, not only those that further democratization but also those that often rapidly undermine it. In restoring the centrality of history to scholarship on democratization, he sets a research agenda that will occupy scholars for some time to come.' Elisabeth Jean Wood, Yale University and the Santa Fe Institute

'Tilly presents the book as the 'culmination and synthesis' (p. xii) of his democratisation work and its final pages contain a provocative challenge to those in the democratisation business. ... those interested in promoting democracy should focus on supporting the three process-based developments he identifies. Accessibly written, the volume will reward a broad readership.'' Political Studies Review

Charles Tilly (PhD Harvard, 1958) taught at the University of Delaware, Harvard University, the University of Toronto, the University of Michigan, and the New School for Social Research before becoming Joseph L. Buttenwieser Professor of Social Science at Columbia University. A member of the National Academy of Sciences, the American Philosophical Society, and the American Academy of Arts and Sciences, he has published fifty books and monographs. His books from Cambridge University Press include Dynamics of Contention (with Doug McAdam and Sidney Tarrow, 2001), Silence and Voice in the Study of Contentious Politics (with Ronald Aminzade and others, 2001), The Politics of Collective Violence (2003), Contention and Democracy in Europe, 1650-2000 (2004), and Trust and Rule (2005).

1. What is democracy; 2. Democracy in history; 3. Democratization and de-democratization; 4. Trust and distrust; 5. Equality and inequality; 6. Power and public politics; 7. Alternative paths; 8. Democracy's past and futures.