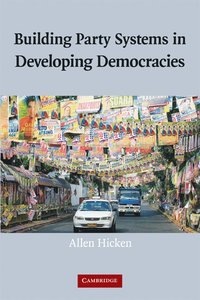 av Allen Hicken
Inbunden Engelska, 2009-01-12
799
Köp
Spara som favorit
Finns även som
Visa alla 3 format & utgåvor
This book addresses the question of why a party system with a modest number of nationally oriented political parties emerges in some democracies but not others. The number of parties and nationalization are the product of coordination between voters, candidates, and party leaders within local electoral districts and coordination among candidates and elites across districts. Candidates and voters can do and do coordinate locally in response to electoral incentives, but coordination across districts, or aggregation, often fails in developing democracies. A key contribution of this book is the development and testing of a theory of aggregation incentives that focuses on the payoff to being a large party and the probability of capturing that payoff. The book relies on in-depth case studies of Thailand and the Philippines, and on large-n analysis to establish its arguments.
Visa hela texten

'Building Party Systems in Developing Democracies is a welcome addition to the growing literature on democratization. While most scholars are content to focus on electoral rules, Hicken argues that this only tells half of the story by giving pride of place to political parties. This book is theoretically sophisticated, analytically rigorous and empirically rich. It will certainly take its place on the bookshelves of scholars and practitioners alike.' David Leblang, University of Virginia

'Allen Hicken addresses a very important problem in the scholarship on party systems: the emergence or failure of coordination across districts and regions between candidates competing in elections at the district level. His work fills a major theoretical and empirical gap in our understanding of the relationship between election rules and political parties. As the author shows compellingly, this subject is an essential element in the development of national party systems, shaping the number of parties and their orientation to political issues. This book makes an important contribution, theoretically and empirically, and will receive a great deal of attention and be widely cited.' G. Bingham Powell, University of Rochester

'Allen Hicken has written a rigorous and important book on how effective party systems emerge in the developing world. Scholars of comparative politics as well as Asian politics will learn much from the book's unique insights into the incentives of politicians to coordinate, and from the remarkable accumulation of data that supports its theoretical claims.' Shanker Satyanath, New York University

'... this valuable volume also has the merit of providing unique data ... and extensive analysis ... Well written, benefiting from a clear style and arguments, deeply rooted in the party politics literature and institutional analyses and with efficient methodology, Hicken's book is another solid brick in the wall of comparative analyses in developing democracies.' Political Studies Review

'Building Party Systems in Developing Democracies is a well-written book and is a valuable contribution to the political party literature. Scholars and students of political parties will find this book interesting, thought-provoking and stimulating reading.' Acta Politica

Allen Hicken is an Assistant Professor of Political Science, Faculty Associate at the Center for Southeast Asian Studies, and Faculty Associate at the Center for Political Studies at the University of Michigan. He studies elections, parties, and party systems in developing democracies, with a particular focus on Southeast Asia. He has carried out research and held research positions in Thailand, the Philippines, Singapore, and Cambodia. He is the recipient of a Fulbright Award and, along with Ken Kollman, an NSF grant. His publications include articles in the American Journal of Political Science, the Journal of Politics, Electoral Studies, the Journal of East Asian Studies, and the Taiwan Journal of Democracy.