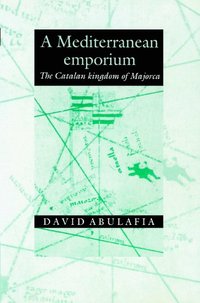 The Catalan Kingdom of Majorca

av David Abulafia
Häftad Engelska, 2002-05-01
399
Köp
Spara som favorit
Skickas inom 10-15 vardagar.
Fri frakt inom Sverige för privatpersoner.
Finns även som
Visa alla 1 format & utgåvor
Situated astride the trade routes of the western Mediterranean, the Catalan kingdom of Majorca has long deserved attention. It was established under the will of King James I of Aragon, who conquered Majorca in 1229, but was ruled from 1276 to 1343 by a cadet dynasty. In addition to the Balearic Islands the kingdom included the key business centres of Montpellier and Perpignan, and other lands in what is now southern France. It was also home to important Jewish and Muslim communities, and was the focus of immigration from Catalonia, Provence and Italy. This book emphasises the major transformations in the trade of the Balearic Islands from the eve of the Catalan conquest to the Black Death, and the effect of the kingdom's creation and demise on the economy of the region. Links between the island and mainland territories, and as far afield as England and the Canaries, are analysed in depth.
Visa hela texten

' ... immensely useful ... adds considerable depth to our appreciation of how the trade of the western Mediterranean actually worked.' Economic History Review

Preface; Note on nomenclature; List of the kings of Majorca 1229-1343; Note on the coinage of the kingdom of Majorca; Part I. Unity and Diversity: 1. The Balearic setting; 2. The kingdom and its historians; 3. The constitutional problem; 4. One kingdom, three religions: the Muslims; 5. One kingdom, three religions: the Jews; Part II. The Crossroads of the Mediterranean: 6. The rise of the trade of Mallorca City; 7. Commerce in the age of the vespers; 8. Towards economic integration: the early fourteenth century; 9. The trade of the autonomous kingdom in its last two decades; 10. From the Mediterranean to the Atlantic; 11. The reshaping of Mallorca's economy, 1343-1500; Conclusion; Appendix; Bibliography.