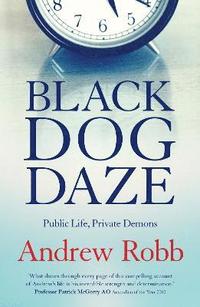 av Andrew Robb
Häftad Engelska, 2011-09-01
589
Bevaka
Spara som favorit
Tillfälligt slut – klicka "Bevaka" för att få ett mejl så fort boken går att köpa igen.
Andrew Robb lived with an unspoken fear that what he passed off as 'not being good in the mornings' was something darker: a black dog whose daily visit lasted longer as the years passed. Worried about stigmas and letting people down, he avoided confronting the problem for four decades, the adrenaline of high-pressure and high profile jobs offering the ideal antidote. Ultimately, realising his ambitions meant having to face up to this very private demon. Andrew Robb's battle with the black dog has touched a chord with many Australians. His memoir explores the challenges of managing depression, political ambition and life in the Liberal Party. Andrew Robb's career has been devoted to the Liberal causea "as Federal Director of the Liberal Party, as Executive Director of the National Farmers Federation, during seven years in the Packer business empire, and now in parliamentary politics. His memoirs document the private struggle and the public life of the Liberal Party's chief political strategist. It offers readers an insight into one man's lifelong battle with a private demon amidst the drama and tumult of contemporary Australian politics.
Visa hela texten

Andrew Robb is the Federal Minister For Trade and Investment. He was elected to the Federal seat of Goldstein in 2004, and has previously served as Federal Director and Campaign Director of the Liberal Party. He has held positions at PBL and the National Farmers' Federation, and has been a board member at Sinclair Knight Merz, Garvan Research Foundation, Menzies Research Centre and the Big Brothers Big Sisters mentoring organisation. In 2003 Andrew was awarded the Office of the Order of Australia and Centenary Medal for his service to agriculture, politics and the community.