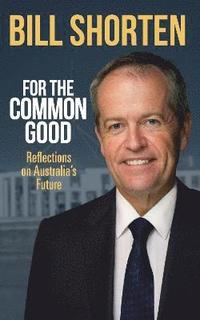 For the Common Good

av Bill Shorten
Häftad Engelska, 2016-05-02
229
Köp
Spara som favorit
Skickas inom 10-15 vardagar.
Fri frakt inom Sverige för privatpersoner.
In For the Common Good, Bill Shorten reflects on the values that led him to devote himself to the labour movement. He looks back on the emphasis on education and social justice in his childhood in Melbourne, and the rewarding years of hard slog as he organised and represented many of Australia's lowest paid workers - including fruit pickers, forklift drivers, furnace operators and strappers - as a union official. In this thoughtful and inspiring narrative, Shorten offers readers an Australia that always cares for those who are in need, is a responsible corporate citizen, and steadfastly focuses on both the local and the global realities.
Visa hela texten

Bill Shorten is leader of the Opposition in the Australian Parliament. He was born and raised in Melbourne, and is a proud Victorian. After completing high school at Xavier College, Bill graduated from Monash University in Arts and Law. Bill also has an MBA from the Melbourne Business School. Becoming involved in the Labor Party at university, Bill worked as a lawyer at the firm Maurice Blackburn Cashman after finishing his studies.Bill joined the union movement in 1994 when he began work at the Australian Workers' Union as an organiser. Passionate about getting a fair deal for Australian workers, Bill became the AWU's Victorian Secretary and then National Secretary. Bill was also a director of Australian Super before entering parliament in 2007. Bill lives in Maribyrnong with his wife, Chloe and their three children.