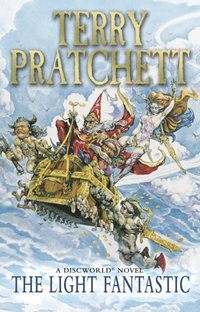 av Terry Pratchett
(6 röster)
Häftad Engelska, 1986-09-01
93
Köp
Spara som favorit
Finns även som
Visa alla 6 format & utgåvor
'Panic?' said Rincewind hopefully. He always held that panic was the best means of survival. When the very fabric of time and space are about to be put through the wringer - in this instance by the imminent arrival of a very large and determinedly oncoming meteorite - circumstances require a very particular type of hero. Sadly what the situation does not need is a singularly inept wizard, still recovering from the trauma of falling off the edge of the world. Equally it does not need one well-meaning tourist and his luggage which has a mind of its own. Which is a shame because that's all there is...
Visa hela texten