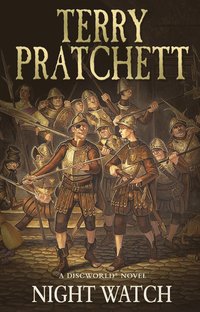 av Terry Pratchett
(2 röster)
Häftad Engelska, 2003-09-01
89
Köp
Spara som favorit
Finns i lager! Skickas inom 1-2 vardagar.
Fri frakt inom Sverige över 159 kr för privatpersoner.
Finns även som
Visa alla 1 format & utgåvor
Commander Sam Vimes of the Ankh-Morpork City Watch had it all. But now he's back in his own rough, tough past without even the clothes he was standing up in when the lightning struck.
Visa hela texten

" He is a satirist of enormous talent . . . His jokes slide under your skin as swiftly as a hypodermic syringe, leaving you giggling helplessly." <br>-- "The Times" <p>"From the Trade Paperback edition."

Terry Pratchett is one of the most popular authors writing today. He lives behind a keyboard in Wiltshire and says he 'doesn't want to get a life, because it feels as though he's trying to lead three already'. He was appointed OBE in 1998. He is the author of the phenomenally successful Discworld series and his trilogy for young readers, The Bromeliad, is scheduled to be adapted into a spectacular animated movie. His first Discworld novel for children, THE AMAZING MAURICE AND HIS EDUCATED RODENTS, was awarded the 2001 Carnegie Medal.