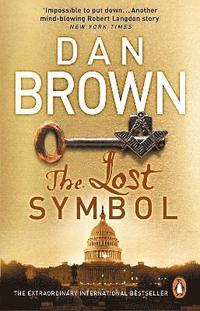 av Dan Brown
Häftad Engelska, 2010-07-22
96
Köp
Spara som favorit
Skickas inom 5-8 vardagar.
Gratis frakt inom Sverige över 159 kr för privatpersoner.
Finns även som
Visa alla 2 format & utgåvor
The Capitol Building, Washington DC: Harvard symbologist Robert Langdon believes he is here to give a lecture. He is wrong. Within minutes of his arrival, a shocking object is discovered. It is a gruesome invitation into an ancient world of hidden wisdom. When Langdon's mentor, Peter Solomon - prominent mason and philanthropist - is kidnapped, Langdon realizes that his only hope of saving his friend's life is to accept this mysterious summons. It is to take him on a breathless chase through Washington's dark history. All that was familiar is changed into a shadowy, mythical world in which Masonic secrets and never-before-seen revelations seem to be leading him to a single impossible and inconceivable truth... Origin, the spellbinding new Robert Langdon thriller from Dan Brown, is out now
Visa hela texten

Thrilling and entertaining, like the experience on a rollercoaster * Los Angeles Times * So compelling that several times I came close to a cardiac arrest...As perfectly constructed as the Washington architecture it escorts us around * Sunday Express * A narrative that can grip you like a vice... As engaging a hero as you could wish for * Daily Mail * Unputdownable...Gripping...Jaw-dropping...The blockbuster read of the year * News of the World * Impossible to put down...Another mind-blowing Robert Langdon story * The New York Times *

Dan Brown is the bestselling author of Digital Fortress, Deception Point, Angels and Demons, The Da Vinci Code, The Lost Symbol and most recently, Inferno. Three of his Robert Langdon novels have been adapted for the screen by Ron Howard, starring Tom Hanks. They have all been international blockbusters. His new Robert Langdon novel, Origin is out now. Dan Brown is a graduate of Amherst College and Phillips Exeter Academy, where he has taught English and Creative Writing. He lives in New England.