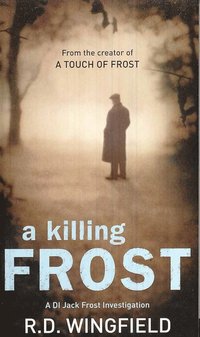 av R D Wingfield
(1 röst)
Häftad Engelska, 2008-10-09
96
Köp
Spara som favorit
Skickas inom 7-10 vardagar.
Fri frakt inom Sverige över 159 kr för privatpersoner.
Kan levereras innan jul!
Finns även som
Visa alla 1 format & utgåvor
On a rainy night in Denton, Detective Inspector Jack Frost is called to the site of a macabre discovery in the woods - that of a human foot. Meanwhile a multiple rapist is on the loose, the local supermarket reports poisoned stock and a man claims to have cut his wife up into little pieces, yet can't recall where he hid them. But it is when two young girls are reported missing in quick succession that the Denton crime wave reaches terrifying heights. As the exhausted Frost staggers from case to case, pressured from all sides and haunted by memories of his wife, something nasty arrives at the station in the form of Detective Chief Inspector Skinner. The scheming, slippery Skinner clearly has his eye on the Superintendent's office, but his first job is to manipulate the transfer of the unorthodox D.I. Jack Frost to another division. Will Frost find the missing girls before his new nemesis forces him away from Denton once and for all?
Visa hela texten

The action is non-stop... The shambolic Frost has become a much-loved figure in crime fiction and Wingfield will be remembered especially for having created such a distinctive personality * DAILY TELEGRAPH * Swaggeringly fluent and fast-paced... Frost remains by far the most unattractive cop in mainstream crime fiction -- Mark Lawson * GUARDIAN * Another jam-packed, thrilling outing for Wingfield's DI Jack Frost. With more twists than a bucket of eels, this is a fitting climax to an incredible series. I can't believe there won't be any more -- STUART MACBRIDE

After a successful career writing for radio, R. D. Wingfield turned his attention to fiction and created the character of DI Jack Frost, who has featured in the titles Frost at Christmas, A Touch of Frost, Night Frost, Hard Frost and Winter Frost. The series has been adapted for television as the perennially popular A Touch of Frost starring David Jason. R. D. Wingfield died in 2007.