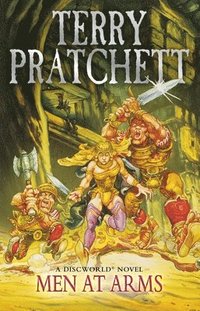 av Terry Pratchett
(2 röster)
Häftad Engelska, 2013-02-14
99
Köp
Spara som favorit
Skickas inom 7-10 vardagar.
Fri frakt inom Sverige över 159 kr för privatpersoner.
Finns även som
Visa alla 2 format & utgåvor
'Funny, wise and mock heroic . . . The funniest and best crafted book I have read all year' Sunday Express The Discworld is very much like our own - if our own were to consist of a flat planet balanced on the back of four elephants which stand on the back of a giant turtle, that is . . . __________________ 'What's so hard about pulling a sword out of a stone? The real work's already been done. You ought to make yourself useful and find the man who put the sword in the stone in the first place.' The City Watch needs MEN! But what it's got includes Corporal Carrot (technically a dwarf), Lance-constable Cuddy (really a dwarf), Lance-constable Detritus (a troll), Lance-constable Angua (a woman... most of the time) and Corporal Nobbs (disqualified from the human race for shoving). And they need all the help they can get, because someone in Ankh-Morpork has been getting dangerous ideas - about crowns and legendary swords, and destiny. And the problem with destiny is, of course, that she is not always careful where she points her finger. One minute you might be minding your own business on a normal if not spectacular career path, the next you might be in the frame for the big job, like saving the world . . . __________________ The Discworld novels can be read in any order but Men At Arms is the second book in the City Watch series.
Visa hela texten

'Persistently amusing, good-hearted and shrewd' * Sunday Times * 'The great Terry Pratchett, whose wit is metaphysical, who creates an energetic and lively secondary world, who has a multifarious genius for strong parody ... who deals with death with startling originality. Who writes amazing sentences' * New York Times * 'His spectacular inventiveness makes the Discworld series one of the perennial joys of modern fiction' * Mail on Sunday * 'Like Jonathan Swift, Pratchett uses his other world to hold up a distorting mirror to our own, and like Swift he is a satirist of enormous talent ... incredibly funny ... compulsively readable' * The Times * 'Funny, wise and mock heroic...The funniest and best crafted book I have read all year' * Sunday Express *