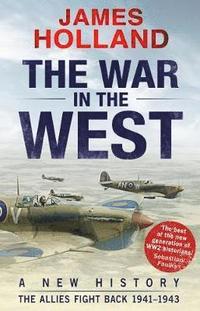 The War in the West: A New History

av James Holland
Häftad Engelska, 2017-11-02
114
Köp
Spara som favorit
Skickas inom 7-10 vardagar.
Fri frakt inom Sverige över 159 kr för privatpersoner.
Kan levereras innan jul!
Finns även som
Visa alla 1 format & utgåvor
From Hitler's invasion of Russia, America's entry into the conflict and the devastating Thousand Bomber Raids over Germany, to the long grinding struggle in the deserts of North Africa and the crucial Battle of the Atlantic, the middle passage of the Second World War was all about turning back the Nazi tide. These catalytic moments would come to define the course of the war and its outcome. They encompass the most vicious fighting, the most hair-raising strategy and the most breathtaking bravery. Across the battlefronts on land, sea and air, to the streets, fields and factories of Britain, America, Africa and Europe, Holland shows, in his own dramatic and compelling style, how the fortunes of war were changed and what happened when the Allies were finally able to fight back . . . 'Impeccably researched and superbly written... Holland's fascinating sage offers a mixture of captivating new research and well-considered revisionism' Observer 'Exceptional... Holland's success is built in part on an engaging writing stule and in part on a genuinely fresh approach to events' Wall Street Journal 'The best of the new generation of WW2 historians' Sebastian Faulks
Visa hela texten

This second volume easily reaches the benchmark set by it's predecessor . . . the style is crisp, engaging, absorbing, it really does have the feel of a fresh and revisionist perspective on the momentous events that occurred between 1941 and 1943 * Soldier * Holland brings a fresh eye to the ebb and flow of the conflict . . . [A] majestic saga * Literary Review * Makes us eager for the third and final part of what now ranks as a towering work of historical research and writing * BBC History Magazine * Holland shoots down the myth of German invincibility . . . All the great turning points of 1941-43 are here. A triumph * Sunday Express * James Holland has established himself as one of the premier World War II Historians * History of War *

James Holland is an internationally acclaimed and award-winning historian, writer, and broadcaster. The author of a number of best-selling histories including Battle of Britain, Dam Busters, Burma '44 and, most recently, Big Week, he has also written nine works of historical fiction, including the Jack Tanner novels. He is currently writing an acclaimed three-volume new history of the Second World War, The War in the West. He has presented - and written - many television programmes and series for the BBC, Channel 4, National Geographic, History and Discovery Channels. He is also co-founder of the Chalke Valley History Festival and co-founder of WarGen.org, an online Second World War resource site, and presents the Chalk Valley History Hit podcast. A fellow of the Royal Historical Society, he also has a weekly podcast with Al Murray, We Have Ways of Making You Talk: Al Murray and James Holland Talk World War II. He can be found on Twitter as @James1940.